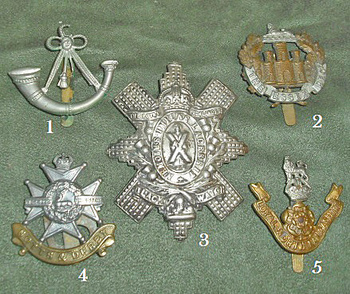 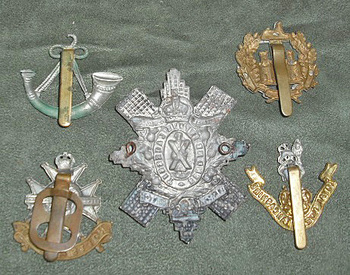 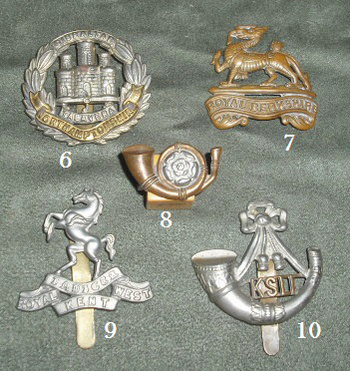 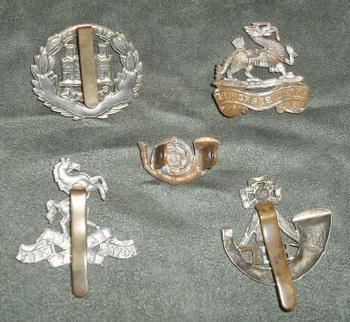 So why is a Yank so interested in British Badges? I got the bug when I was working alongside the British Army of the Rhine back during the Cold War. There was a Brit soldier/collector that was interested in US insignia, so I’d bring a bag of unit crests back from the States and he’d bring cap badges found in shops from his home in England. Ah, the pre-eBay days! Other stuff – boots, field jackets, etc. got traded too, but it was the cap badges that stuck with me.

1. The Oxfordshire and Buckinghamshire Light Infantry wear the hunting horn associated with light infantry. Again mine was off the first belt, and was so heavily corroded that a knot loop and tassel fell off. I still have the tiny tassel some place.

2. The Essex Regiment bears the sphinx of Egypt and the castle of Gibraltar for their service there.

3. The Black Watch (Royal Highlanders). Its name may derive from their tartan, which supposedly made their kilts look black from a distance. Their badge is based on the Order of the Thistle, with St Andrew at the center. Mine is a rather poor strike compared to another I have still on a belt. It makes me a tad skeptical and I hope to upgrade.

4. The Sherwood Foresters (Nottingham and Derbyshire Regiment) appropriately has a stag from the arms of the city. This badge came with a clip over the slider. This means that the badge was likely from a post-1940 field service cap or other headgear. Nonetheless, it is the same insignia as WWI, and I’ll keep it till I can upgrade.

5. The Loyal North Lancashire Regiment bears the rose of Lancashire. The “Loyal” title comes from the motto of the Earl of Lindsey. This slider is also “hairpin” shaped to give support between the crown and rose.

6. The Northamptonshire Regiment has the key and castle of Gibraltar commemorating the siege of 1779-83.

7. Princess Charlotte of Wales’s (Royal Berkshire Regiment) wears the dragon in honor of their actions in China 1840-2. Another badge who’s slider has gone missing.

8. The King’s Own (Yorkshire Light Infantry) wear the Rose of Yorkshire inside of the light infantry horn. It’s the smallest badge in the British Army, and based on this one’s back lugs, I’m not sure if mine wasn’t supposed to be a collar badge.

9. The Queen’s Own (Royal West Kent Regiment) wears the rearing white horse associated with their county.

10. The King’s Shropshire Light Infantry wear their initials in the hunting horn of the light infantry.