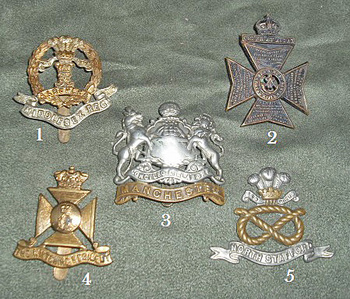 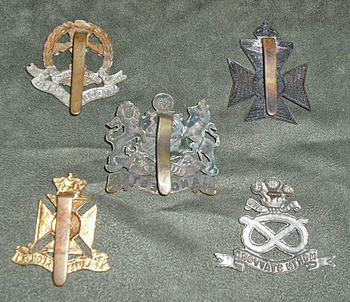 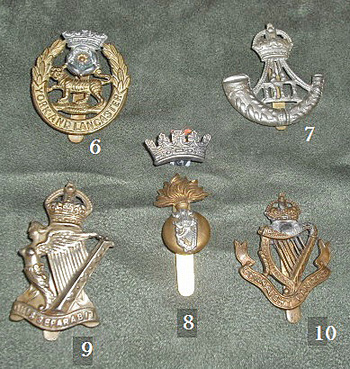 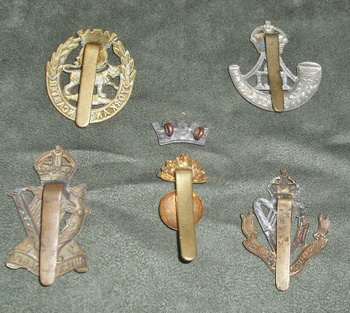 During WWI, US regimental insignia was rather monotonous - the regimental number over the branch insignia. Americans serving in France saw allied regimental insignia, and appreciated the pride and spirit de corps that evolved around them. Out of our experience in WWI, the US War Department created an office of heraldry in 1919. The inspiration for the creation of US unit crests can therefore be found in the cap badges of the British Army.

2. The King’s Royal Rifle Corps wears a blackened badge with the Maltese Cross associated with rifle regiments. As a rifle regiment it bore no colors, so its battle honors are on the arms of the cross. This came from a WWII veteran of the regiment.

3. The Manchester Regiment wears the arms of its city. The badge was sometimes disparaged as “the tram conductor’s badge”, and the regiment switched to a fleur-de-lys badge in 1923. Mine’s been polished so often the shield of the coat of arms has been rubbed smooth.

6. The York and Lancaster Regiment bears the royal tiger of India and the union rose, referring to the union of the two royal houses. This is the other “Cat and Cabbage” badge.

7. The Durham Light Infantry wear their initials in the hunting horn of the light infantry.

9. The Royal Irish Rifles have the motto of the Order of St Patrick (who shall separate us?) along with the Irish harp. This one has a funky fat slider, and I believe it’s from a later era after Irish independence when the regiment became the Royal Ulster Rifles.

10. The Connaught Rangers wear the harp of Erin. They were disbanded in 1922 upon creation of the Irish Free State. The crown on mine has been broken off and repaired with an ugly lump of solder.