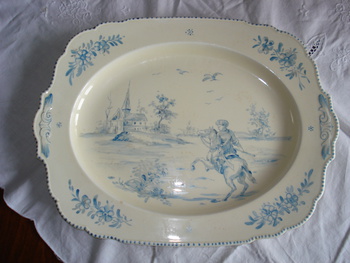 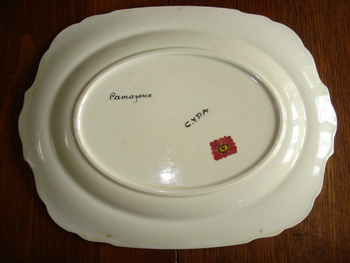 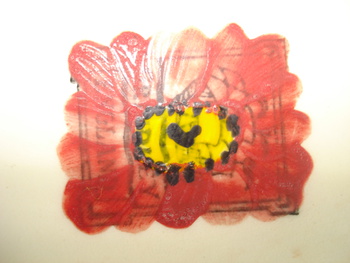 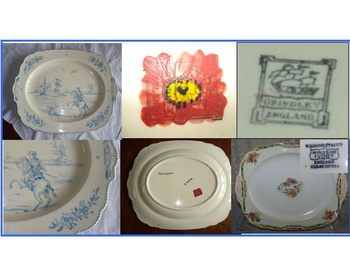 On July 2010 Sergio and I went to a garage sale, near the Kempes Soccer Stadium, it was a big one, we call this type of selling Feria Americana, where people that want to sell something does not use longer give it to some one that is going in consignement. The only think we bought was this big platter, neither because of the price (U$ 40) nor because of its beauty, if not because it was clear that the bacstamp was amusing, it was a mistery to solve. It has three seals on reverse: Camayeux written in italics, a flower heavily enamel in red and yelloy hiding a stamp and the word CYPA (second picture). Under the latter "seal" another well known one of English Grindley can be seen (third picture). In this web site http://www.thepotteries.org/mark/g/grindley.htm it is said that the stamp is that of Grindley between 1936 and 1954.
Camaïeu is translated into Spanish as Cameo and refers to figurative painting using various shades of a single color, usually blue, green or purple, when performed in black is called chiaroscuro. Camayeux is the plural of camaieu in French. Actually platters with contoured edge and decorated with this painting technique are frequent in French dishes. http: // quimperclubinternational. blogspot.com/2010/09/some-favorites-in-camaieu-blue.html. http://www.antique-trading.com/antiques /detail.php?siteid=372, circa 1900 http://www.antiquites-in-france.com/item/29848/beau-plat-oblong-camaieu-bleu-18eme). Therefore we conclude that Camayeux should refer to a "pattern" and not a brand. So what is the brand CYPA ?. Searching the Internet we found that in Argentina in 1939 an industry dedicated to the manufacture of decorative ceramics was installed: the CYPA signature (Ceramic & Porcelain Argentina) directed by Tellier, with the assistance and advice of Forestier (http: //www.telpin.com.ar/interneteducativa/PeriodicoTEduca/Ceramica/index.htm). They made pottery of Faenza type, decorated with white enamel pigments on, or covers of different colors. CYPA articles made ??big impact on the market because before that there was no porcelain industry in Argentina, it was imported and it came by boat that then return to Europe with cereals and meat. Thus the platter is Grindley. In the last image a Grindley platter is shown that has the same blank or shape but with a different decoration pattern. http://cgi.ebay.com/WH-Grindley-ASTORIA-Windsor-Ivory-OVAL-SERVING-TRAY-/350346484137?pt=LH_DefaultDomain_0&hash=item51924719a9#ht_3577wt_1140
We conclude that the platter was manufactured by Grindley between 1936-39 decorated by CYPA in Argentina with Camayeux pattern. The Grindley hidden with flower stamp may be due to a strategy to avoid paying import taxes or a trick performed by an unscrupulous seller to pass the product as French, although if this was the reason also would have covered CYPA.
You can visit our blog http://misterypotterymarks.blogspot.com.ar/2010/09/mistery-of-sa-mark.html