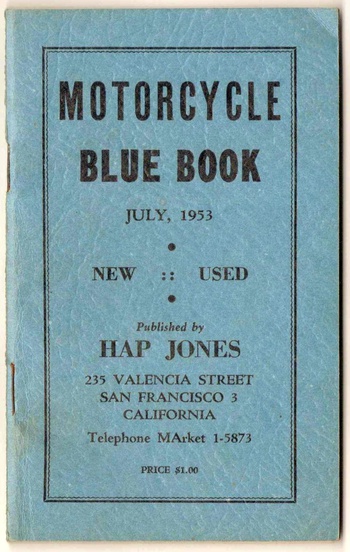 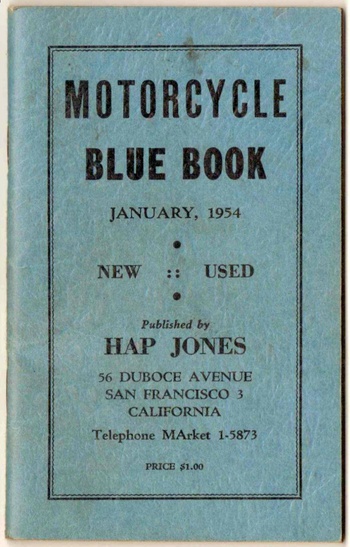 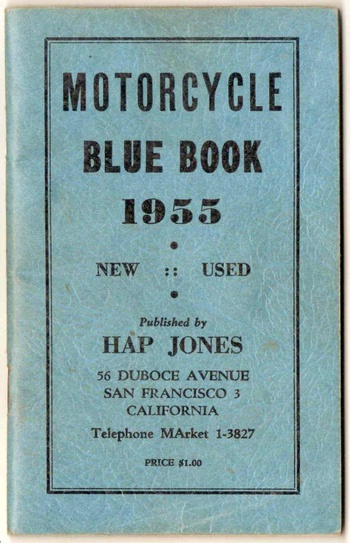 Three issues of the "Motorcycle Blue Book" published by Hap Jones.
- Lists suggested dealer prices for all models of new motorcycles (including optional equipment, scooters and sidecars) and also price lists for used motorcycles (trade-in values and retail resale prices - back to year 1946)
-- all three are paperback booklets in excellent condition
--
-- July 1953 issue - 39 pages / January 1954 issue - 45 pages / 1955 issue - 48 pages
*** Hap Jones was best known for founding a thriving motorcycle accessories distribution company, but he was also a top racer in the 1930's, winning the AMA National TT Championship for 80-cubic-inch motors in 1936. Jones was a successful motorcycle dealer and sponsored a number of top racers over the years as well as sponsoring of many regional and national races. Jones recognized the importance of the history of the sport and kept extensive files on motorcycling's past. Jones supplied several authors of enthusiast books with important research materials. By 1937, Jones was awarded an Indian dealership. He sold Indians through 1946 when he began selling various British brands such as BSA, Sunbeam, AJS-Matchless and later Norton. He was also the first to ride, then push his Indian Chief through the crowd of pedestrians to become the first motorcycle rider to cross the Golden Gate Bridge. Jones sold his retail dealership by 1959 to concentrate on his distributing company, which became one of the largest in the country. His motorcycle Blue Book, which gave pricing guidelines for used motorcycles, was a staple in the industry. - Hap Jones died in 1989