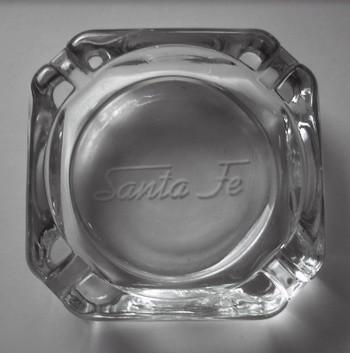 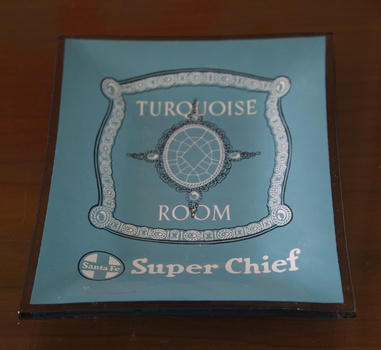 The clear glass ashtray has an etched "Santa Fe" identifying it. This was used on the trains going from Chicago to Southern California. The etching looks to be of the Art-Deco genre.

Then we see a colorful Santa Fe ashtray from the Turquoise Room which ran on the Line's extra fare "Super Chief". Entrance to the Turquoise was extremely exclusive, requiring in addition to paying a second extra fare, was the fact that the rider had "to be somebody".

These trains ran through the Western USA's states which have a large Indian population, and the Santa Fe used this fact as a way to attract passengers. The Western Indian motif was a characteristic of these trains, as is clear from the design of the Turquoise Room's ashtray.