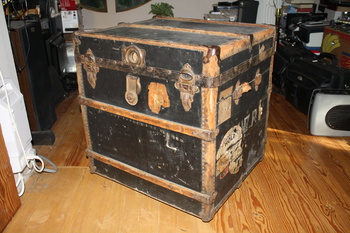 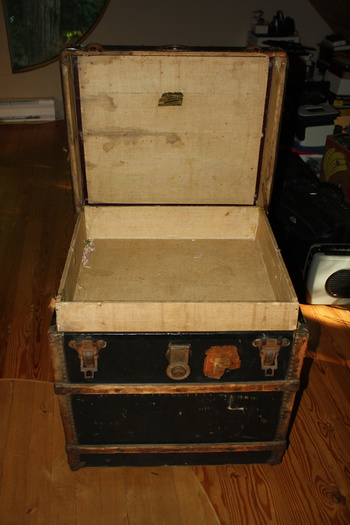 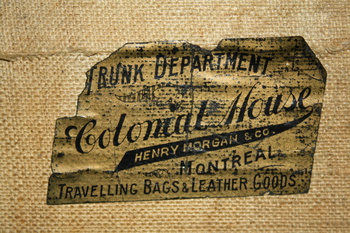 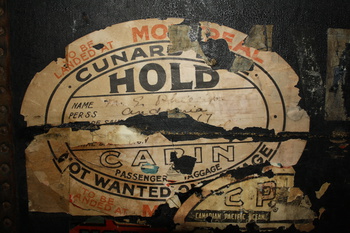 This trunk is only 23" wide rather than the standard 36" of a regular travel trunk.

It looks to be manufactured in Montreal, Canada, as per the label inside the lid (photo #3), and the original tray is intact. As with most of the trunks I have it smells real funky inside! I've been trying various methods to reduce/eliminate the smell including cedar chips, coffee beans, and leaving them in the sun to air out. Nothing is helping all that much. Anybody have a fool-proof technique?

As a fellow by the name of Scott stated in the comments to one of my other postings, "buy the antique and not the story", but for the $35 I paid for this one I figured the great story that came with is just a bonus:

The previous owner was invited about 20 years ago to visit her friend in New York. Her friend was a props manager for a company that supplied such things to movie studios; so the seller and her friend spent the day hanging out in the back lots and on the sets of a movie that was being filmed at the time.

Several months later after the shooting for the movie had finished the seller was contacted by her friend to say that many of the props were being liquidated and so that's how this trunk came into her possession.

The name of that movie was "Little Women", the 1994 version with Susan Sarandon and Winona Rider. I have yet to watch the movie and pause frame-by-frame through the scenes that might contain the trunk to confirm that it's the same one. This trunk has had little pivot wheels mounted on the base that seem to suggest some validity to the story since it would sure make moving it around on a set a lot easier.