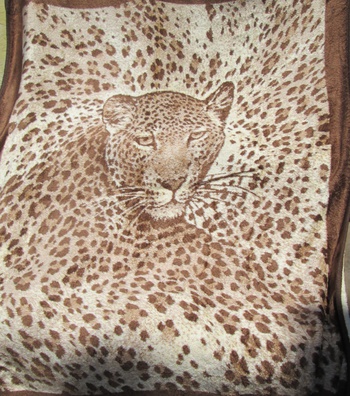 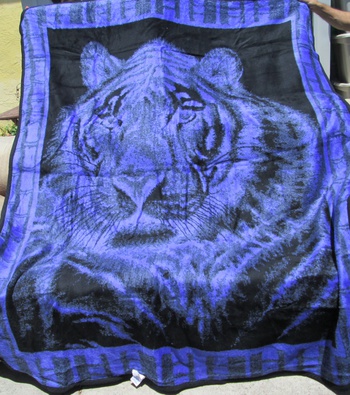 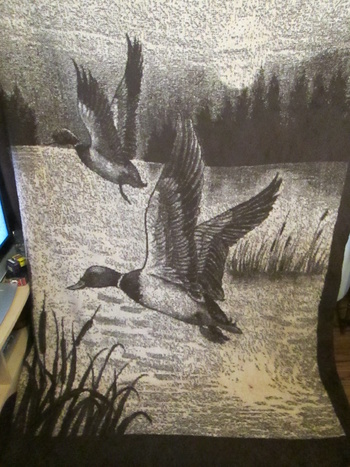 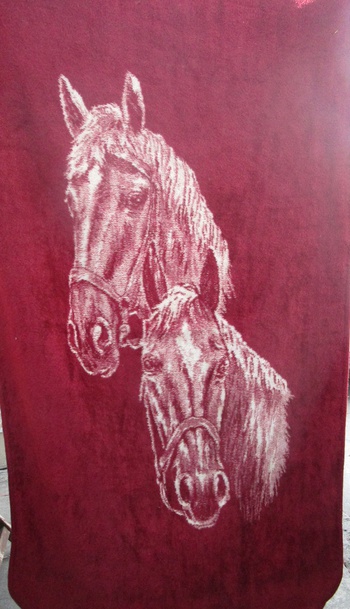 San Marcos blankets were produced from 1976 - 2004. Brothers Jesus and Francisco Rivera were sombrero manufacturers in Aguascalientes, when Jesus came across a product in Spain that inspired him to produce a pictorial blanket that was thick, warm, durable and inexpensive. He experimented for years until he found the right combination of materials and began making the blankets which became known simply as "San Marcos," the company he named after his hometown. The blankets were a huge hit, so popular that when he unveiled his designs at the yearly hotel conventions, people gathered in eager anticipation to see the new lines. San Marcos blankets were designed by artists in Spain, and while the designs were nice enough in themselves, the blankets were produced in a range of wildly gaudy colors, depicting animals mostly, though some designs were of flowers, geometric shapes, etc. Made of acrylic/polyester, the blankets were as Jesus Rivera had envisioned, plush and soft, warm and thick yet light, durable, and cheaply produced and sold, often by street and swap meet vendors. The bright colors were appealing, and the blankets were unusually comfortable. People used them as bedspreads, as blankets in the winter, the small ones were especially desirable for babies. A favorite among Mexican families, the blankets were given as gifts and every Mexican household owned several, so it seemed. Doomed by its own popularity, San Marcos was widely imitated, cheap knockoffs, known as "Koreanas," flooded the market, and San Marcos eventually went out of business. But the Koreanas were not of the same quality as San Marcos, and after a time original San Marcos blankets came back into popularity, fueled by practicality as well as nostalgia; children who had grown up with San Marcos, suddenly yearned for the comfort and familiar feel and look of their old San Marcos; even those who had disdained the blankets in their youth now craved the familiar iconic blankets, seeking a favorite design, Virgen de Guadalupe, Aztec warriors, leopards and lions. I've often said that if your grandma owned ten, your parents had five, and you ended up with one or two favorites, and its mostly the case that many Mexican homes still own a few of the blankets, but for some people that one or two isn't enough. There are avid collectors of the blankets, and where once these blankets sold for a few dollars brand new, on the secondary market they now command anywhere from thirty to two hundred or more dollars. And as the blankets are hoarded, and become more scarce, the prices continue to rise. If you read forums where people talk about the blankets (often in search of one to buy), they speak in terms of the same qualities Jesus had looked for all those years ago, and perhaps he wouldn't be surprised to find that when people are unhappy or feeling unwell, they seek out the warmth and comfort of a San Marcos to wrap themselves into.

San Marcos blankets were produced with some variations, but for the most part, if you are looking for a genuine San Marcos, characteristically, they are made of 90% acrylic, 10% polyester, though sometimes cotton was part of the mix. There were mainly three styles of binding, most often a pleated satin, also there was a soft ribbed binding which was the least durable of the three, and third a heavy netted binding of the type used on rugs; all three types were thick, and sewn on with zigzag stitching. Corners of the blankets were almost always rounded, though I've seen one or two on eBay with square bindings I'm not convinced were genuine. And the iconic satin tag, pale beige, though again lately I've seen San Marcos tags that are unusual and sometimes even a double tag which I had not seen before. Don't know if those are genuine, meaning original, or if someone is again producing blankets under the old name.

(The San Marcos pictured above are blankets I've sold on eBay, altogether I've sold about a dozen, will post more on another thread. I've kept two favorites, Virgen de Guadalupe and a peacock with roses, would love to have the Aztec warrior.)