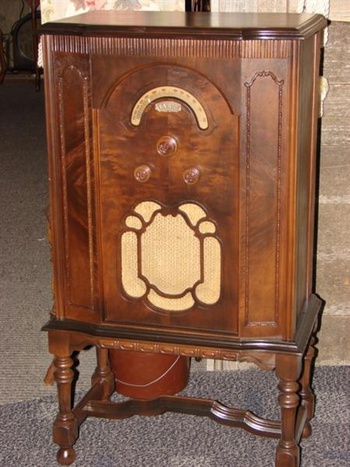 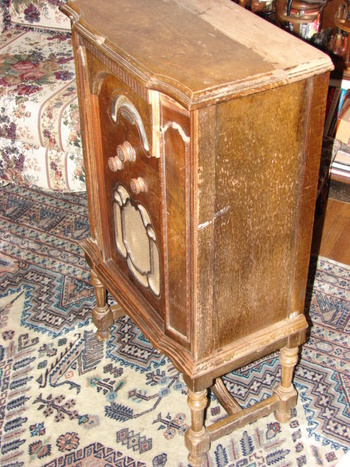 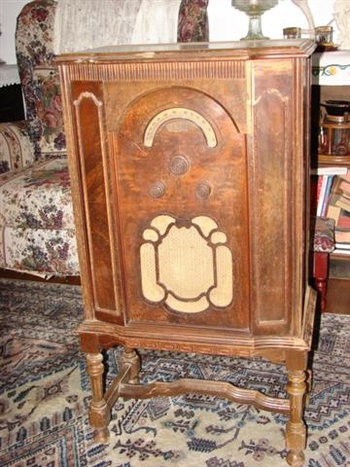 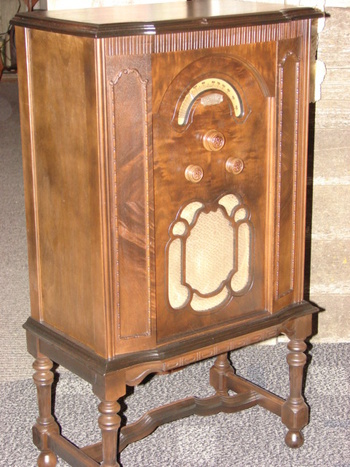 This is a Lyric radio made in 1931-32 ,,model S-7. It is made by the Mohawk corp. I first saw it at an antique show in Calgary Alberta[where I live]. I was not goint to buy it but then my wife saw it and said we should get it. So for $80.00 it was mine. It did tune in a station when I tried it so I knew I could get it going. After replacing all the capacitors and a through cleaning of the chassis it worked very well with no hum..This radio had to have some of the best parts in that I have seen.. Everything was very well made
The cabinet was a different story. One of the small decorative arches was broken ,and I thought about how to fix or replace it for about a month.. I finally settled on taking the good one off the radio and making a mould of it and making a new one,,which worked out quite well. I did strip the whole radio and then gave it three coats of dark walnut Mohawk toner laquer on the top and around the bottom edge [above the legs]. I then gave the whole cabinet two coats of dark walnut toner . A final coat of clear laquer was the finish..I did lightly sand in between coats with 2000 grit sandpaper.This was not my first radio to refinish ,but it is one of our favorites as it only stands about 30 inches tall. I hope you can tell the before and after photos ENJOY