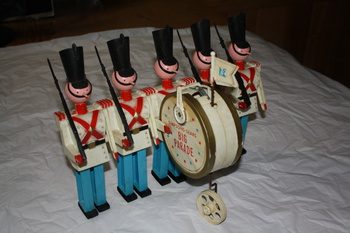 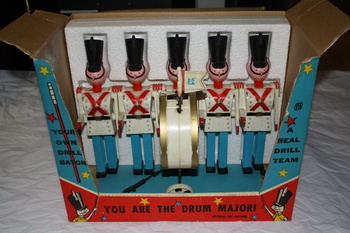 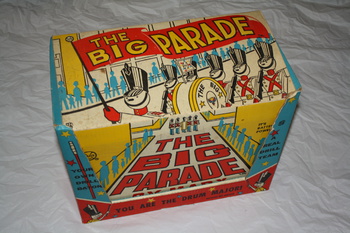 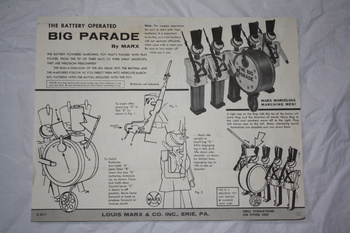 Here's a toy from days of Christmas past. This is one of two Christmas gift items I still have from my childhood. The patent-pending date on this item is 1963 but I believe I received it for Christmas in 1965 or 1966.

It was made by Louis Marx & Co. Inc. (commonly just referred to as Marx) in Erie, Pennsylvania, and is co-branded for Simpsons Sears - a Canadian department store chain - with stickers on the drum and flag.

I have the original box, instructions, and even the Styrofoam packing! It's missing the rubber band that went around the wheel as well as the baton.

It uses two D-cell batteries that operate a motor which drive the legs and swinging arms of the soldiers. The walking motion propels the toy forwards (or backwards) and the baton is used to tap the plastic flag on top of the drum to control the steering. It makes a rat-a-tat sound which thrills a child and annoys an adult!

I recall attaching a string to this toy and parading a whole line of other toys strung together down the hallway!

It suffered some damage to the battery compartment and flag pole assembly on its very first Christmas - it wasn't my fault! - but overall it has withstood years of play and the test of time after 50+ years!