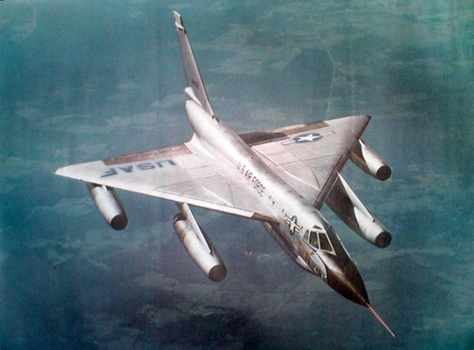 - 20" wide by 15" high color photo poster from the 1960's - (cropped)
- The photograph is of the Convair B-58 Hustler in flight over East Asia.
- Photo taken by official USAF photographer TSgt. James T. Truitt **
* The Convair B-58 Hustler was the first operational supersonic jet bomber capable of Mach 2 flight and developed for the United States Air Force for service in the Strategic Air Command (SAC) during the 1960's. It carried a nuclear weapon and fuel in a large pod under the fuselage rather than in an internal bomb bay. Its first flight was in 1956 and it was entered into service in 1960. Replacing the Boeing B-47 Stratojet medium bomber, it was originally intended to fly at high altitudes and supersonic speeds to avoid Soviet fighters. The B-58 received a great deal of notoriety due to its sonic boom, which was often heard by the public as it passed overhead in supersonic flight. Convair built 116 B-58's: 30 test and pre-production aircraft and 86 for operational service. Hustlers flew in the Strategic Air Command between 1960 and 1970. The Hustler was retired in 1970, succeeded by the smaller, swing-wing FB-111A. - There is a B-58 Hustler housed at the National Museum of the United States Air Force in Dayton, Ohio. Singer John Denver's father, Colonel Henry J. Deutschendorf, Sr., USAF, held several speed records as a B-58 pilot.
** Photographer TSgt. James T. Truitt - spent 29 years in the US Air Force as a Photographer, retiring in 1977 as a Senior Master Sgt. - Many of his photos are included in Smithsonian collections. He passed away in Jan., 2013 at the age of 84.