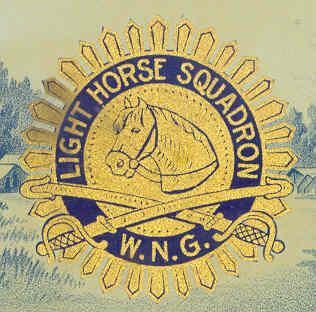 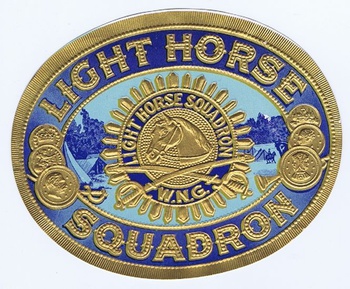 The Milwaukee Light Horse Squadron was a volunteer Wisconsin National Guard unit established in 1880 as an Honor Guard. As such it became an elite unit and membership in the LHS was something to be proud of. In those days cigar smoking was very popular and Milwaukee had a large cigar manufacturing industry. Naming a cigar brand after the LHS was very logical considering the time and place. The spectacular LHS cigar box label incorporated the Light Horse Squadron lapel button, (number 53 in my Wisconsin Military and Civil Medals book) and was also used on tip trays. Recently I found an iron “LIGHT HORSE SQUADRON CIGAR” box opener. It is a multi-purpose tool measuring 4 ¾ inches long with the raised inscription “LIGHT HORSE SQUADRON CIGAR”. At the left is a sharp rounded knife blade to cut the tape sealing the boxes? At the top is a small hammer head to tap down the lid nail, I assume, if one wanted to reseal the box lid. At the right is a bottle opener ending with a small angled spike which I guess was to be used as a small pry bar to open the nailed down box lids.