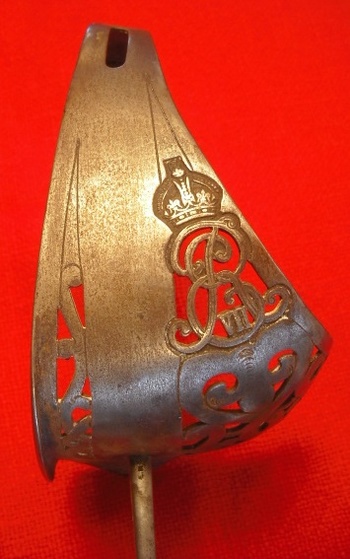 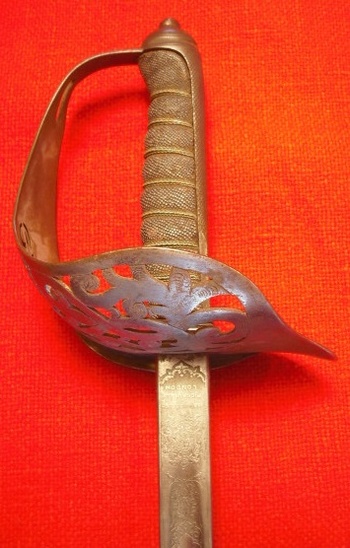 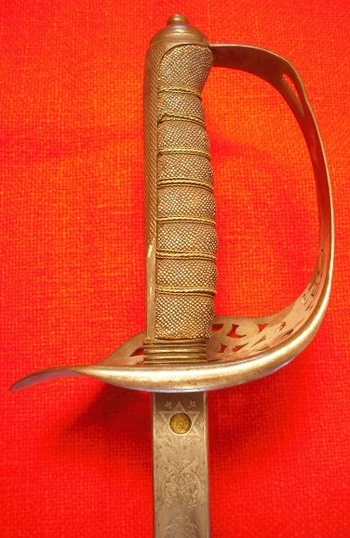 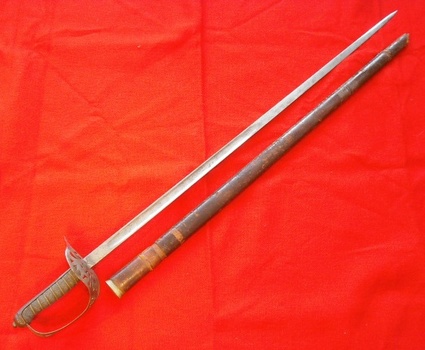 I imagine many British officers were annoyed with the War Department over this one. Officers were required to buy their own kit. In 1892 the War department prescribed a new straight blade for infantry officer’s swords, but kept the hilt the same. Some bought the new sword, others tried to save money by having their old hilts refitted with the new blade. Then, only three years later in 1895 the War Department prescribed a new hilt for officer’s swords, retaining the 1892 blade. To be fair, many officers didn’t update their kit right away, and the lucky ones were the officers that didn’t buy new swords till the turn of the century. Although relegated to ceremonial use, the sword shown remains the current pattern sword for infantry officers today.

This is actually the 1897 pattern, which was slightly modified from the 1895 pattern in that the inside edge of the hilt’s guard that would have rested against the officer’s uniform is turned down to reduce wear against the uniform fabric, and made it a bit more comfortable. The hilt is considered an improvement over the sword I posted last week because the steel is sturdier than brass, the holes in the guard are smaller to better protect the hand from opponent’s sword thrusts, and the back strap is checkered with a flat thumb rest for a non-slip grip. The royal cypher on my sword is for Edward VII, who reigned between 1901 and 1910.

The blade, which was retained from the 1892 pattern, has no edge at all until halfway down the sword. It’s essentially a rectangular bar of steel with a central fuller. The blade edge begins where the fuller ends, with a false edge starting on the other side about four inches from the tip. The blade tapers all the way from the hilt to tip, ending in a spear point. This makes for a very ridged thrusting style blade, a style of swordplay that was considered superior to the old cut and thrust method. A lot of thought went into this blade design, considering how seldom an officer would rely on his sword by the 1890s.

The blade is etched with floral patterns to the end of the fuller. It bears the crowned Edwardian Cypher on one side, and at the base are the Royal Coat of Arms and the manufacturer name “HAWKES & Co. / PICADILLY / LONDON”. The other side bears the crowned shield of the Royal Coat of Arms, and at the base is a brass proof disk inside the Star of Damascus. Its spine bears a 4 digit serial number. The metal throated, leather covered scabbard is unfortunately in poor condition. It is missing its tip and the leather sleeve where it connected to the belt hangar.