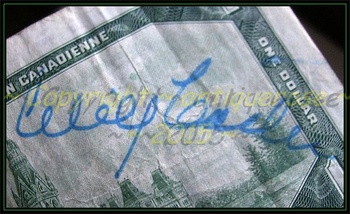 I still have this. It is from 1967. I remember we had gone to the Calgary Stampede (Alberta) and WILF CARTER was playing there. He was a loved Canadian musical artist *back* in the Day (In the USA he was known as MONTANA SLIM- SEE BELOW). We ended getting to be right close to him after the show and my Dad did not have any paper on him so he pulled out this Dollar Bill and got Wilf Carter Signature. Family item/heirloom with memories for me.

[Note] ::::::
**Did not know which category to put under as this Dollar Bill is not USA. I think the Money Category here needs to be re-vamped too