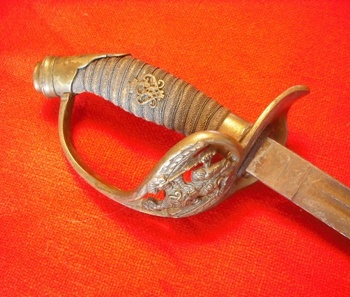 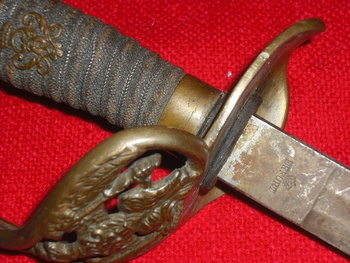 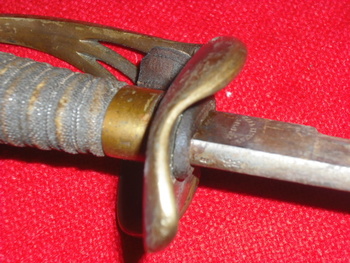 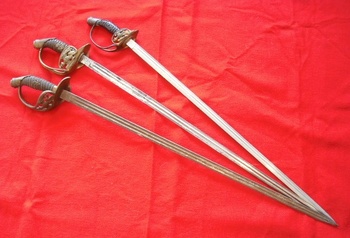 Like the German 1889 Cavalry Sword posted last week, the 1889 German Infantry Officer’s sword was to remain in service through WWI. As with the cavalry sword, it’s designed as a thrusting weapon. A prominent feature is the downward bend of the grip just before the pommel. It certainly feels more ergonomic in the thrust - or when used as a pointer, which was how it was more likely employed by WWI. The insignia on the guard differed depending on which German state the sword was meant for.

This is an arsenal marked official example, which is harder to find than the many privately purchased versions. The right side of the riccasso bears the crown and “ERFURT” for Erfurt Arsenal, The other side bears the name of the blade manufacturer, “CARL EICKHORN”/”SOLINGEN” The base of the spine is bears the crown/W/93 indicating arsenal acceptance in 1893. The blade has two long fullers on each side. Unfortunately this blade is rather dark and pitted, and the point has been reshaped. Possibly the last tiny bit of the tip broke off, necessitating grinding on a new point.

The grips are finished in what I believe is shagreen and wrapped with a double row of twisted wire. The grips bear the royal cypher of Kaiser Wilhelm II. There is what remains of a leather finger loop where the grip meets the guard. The guard is brass and in one piece, rather than the folding guards found on most private purchase swords. The crest on the guard displays the Prussian eagle.

The last photo shows it with the two private purchase swords I’m posting next.