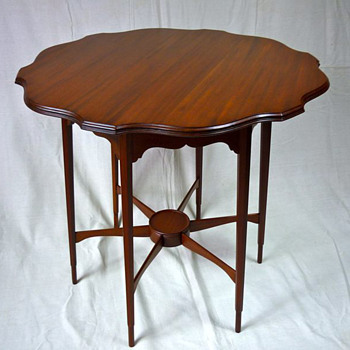 This is a mahogany occasional table designed by George Washington Jack for Morris & Co, circa 1890.

You should be able to see a near identical version in oak from "Arts & Crafts Furniture" by Rodel & Binzen pg 11 (also repeated on pg 29), in the Google Books link in the first comment after this post.

George Washington Jack was Scottish-American born in New York, who grew up in Glasgow.

Jack moved to London and in 1880 was hired by Morris & Co., the leading English Arts & Crafts manufacturer and retailer established by William Morris and Phillip Webb.

The distinguishing characteristics of his works are that they are slender, delicate, and graceful. Most of his influence comes from Phillip Webb, but his designs were also influenced by the Queen Anne era.

Jack worked in wood but also designed for a lot of different materials like stained-glass and mosaics. He was very talented in wood carving and later became a professor at the Central School of Arts and Crafts in London.