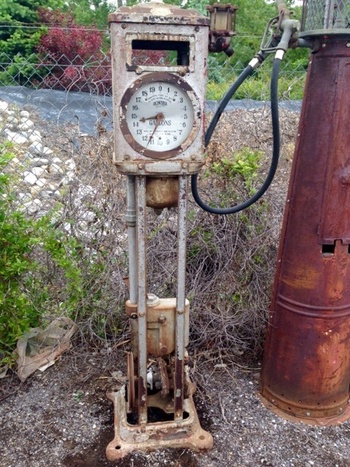 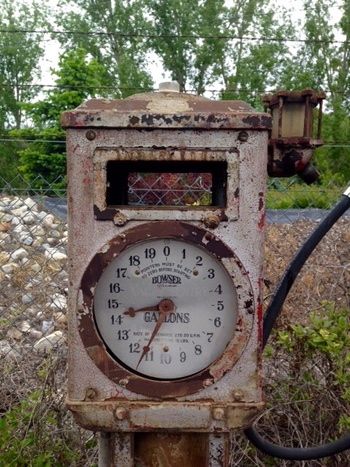 As I continue to say, "the fun is in the hunt". My wife and I took a trip to Jackson Hole Wyo the other day and on the way stopped to pick up a sign I had purchased months ago from a friend. We then had a little time so I decided to go waaaaaay off the road to a tiny little Berg where we had seen this Clockface pump in an old falling down barn about two yrs ago. I had been back multiple times in the past two years to try and find the owner but he lives 350 miles away and no one I found that knew him had his phone number to give me. Par for the course! Well, this trip I set my jaw and decided I would not give up till I found him. As I saw a PU drive out of his little Lane I followed the guy till he stopped and engaged him in asking if he knew Slim, the owner of the delapitated barn. Believe it or not he knows the guy who is a cattle hauler but, like all the rest, he didn't have his phone.number either. No surprise! He did give me the name of a person who he though might know the ph number so off we went trying to find that guy. We actually found it pretty easy and he was actually home and he actually even had the phone number and as luck would have it he accidentally dialed the number as he was looking it up for me. AND Slim answered the phone!!! Hooray!!! Unfortunately the pump was NOT for sale for any price. After a quick conversation and hanging up I called him back on my cell phone and had a nice long conversation about how his pump would be brightly displayed in the Free Museum at aaaLakeside Storage in Provo and we would put a nice placard on it showing that it was donated by his family. That sealed the deal and then the pump became ours and now the challenge arose. A 400# pump and its storming outside and cold and I'm wearing shorts and a tee shirt and am in my 70s as is my wife!!! We needed creativity as this pump was not easily accessible for the best and biggest of men and the place was filled with old giant farm tires and wheels and truck transmissions etc etc etc. Long and short of it is simply "where there is a will, there is a way" and we got the pump in the truck and headed off to a Motel where we had to call the manager who lived 20 min away in the pouring rain and wait to get an overpriced tiny room in a log cabin. That's another story for another day. Keep on hunting as that really is where the fun is.