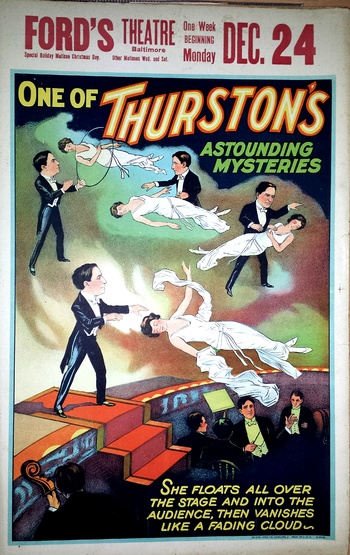 This is an original Thurston stone lithograph window card from my private collection of Magic posters, advertising his performance at Ford's Theatre in Baltimore ca. 1928

This window card titled, "She Floats" advertised Thurston's levitation illusion which is described bottom right on the window card as "She floats all over the stage and into the audience, then vanishes like a fading cloud".

The Ford's Theatre in Baltimore has even more Magic historical significance than just housing Thurston shows, this is the same theatre where Magician Kellar had passed his Magician's wand to Howard Thurston on May 16, 1908, making Thurston Kellar's successor!