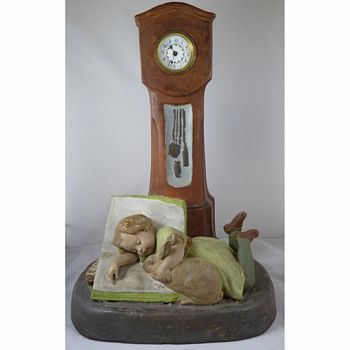 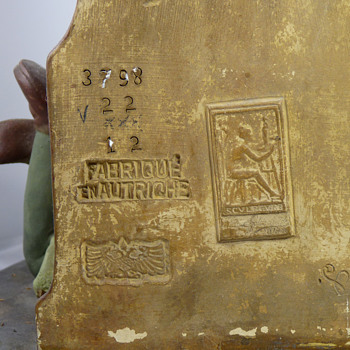 Clocks are special items. They mark time, not only the passing minutes and hours, but also the passing time of our lives.

I'm not a clock guy, and I don't seek them out, but somehow when I've found a good one, it seems to have some personal significance beyond a mere tick tock.

When my little daughter was about three, I found this clock on a local auction site at the other end of the country. The sleeping child looked a lot like my baby, and I recognised the blurry Goldscheider marks, and I got this clock for just a few dollars. The seller seemed to have no idea it could be valuable, and sent it in a cardboard wine box wrapped in a single piece of newspaper, but miraculously it arrived unharmed.

It's 45cm high x 30cm at the base (about 17.5 x 12 inches). I've shown the Goldscheider marks in the second pic, these Austrian Art Nouveau pieces are now harder and harder to find.

The scene is entrancing and rich with meaning.

First of all the grandfather clock shown is in the Biedermeier style, a reference to an antique time, it invokes an earlier era, a century before this clock was made circa 1900.

The rabbit (or hare) is an ancient and universal symbol of the moon (cf the Moon Rabbit) which marks the passing of time, and of course the child is a reminder that youth will certainly age with time.

Still our baby slumbers, clutching her bunny, and like all youngsters, she is blissfully unaware that time is passing.

Meanwhile we're reminded of the past by the book of stories which she snoozes upon, and of course those old stories are probably what sent her off to sleep in the first place.