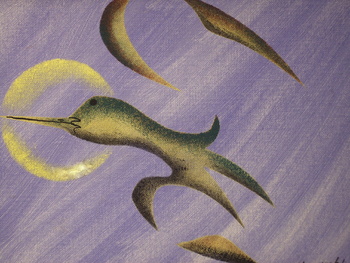 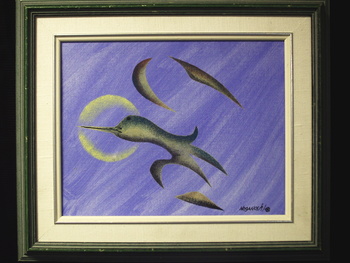 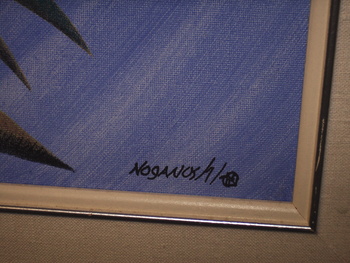 Hi
Everyone.
I decided, to go to my Artwork stack, and pull fews more Artwork for you CW friend, to enjoy them, as much has i do collecting them for the last 20 years, now i pull 2 more Native American Artwork from Canadian Artist,the next 2 are from Russel Noganosh, he was a good friend of Isaac Bignell, this last one really influance Noganosh in the technique of sponge painting, is this an hazard or not, well, i will call this providence, i really love those 2 Acrylic painting.

Russell Noganosh is an Algonquin/Ojibway born on Henvey Inlet first nation in the year 1956. In 1957 at 7 months old he was illegally apprehended from is mother and placed in a foster home in Sunridge Ontario. In 1977 he had taken up the art of sculpting soap stone in Toronto. He left Ontario in 1979 and headed west, where he met Isaac Bignell, a cree artist from the Pas Manitoba.

This is where he learned the sponge technique of painting. For the next 34 years he dedicated himself to this form of art. Basically he is a self taught artist, working with acrylic paints on canvas,paper and birch bark. Using traditional and contemporary themes. through out the years he brought on his own style of painting techniques. Russell has travelled through North America selling his art work and doing art shows.

In 1984 the Manitoba Bison Alumni Association appointed Russell as "Artist of the year".

in 1988 his artistic talent was recognized by The Plains Publishing Company, He was asked by the association to use one of his paintings for the book cover of "Art of the Ne Hiya Wak". This book was distributed to schools and libraries and eventually the book was promoted to Japan.

In 1997 the Aid's foundation in Minneapolis commissioned Russell to create a poster for their Aid's Awareness Conference.

In 2004 Fern Hill Private School in Toronto purchased a carving and presented it to Prince Andrew at a Careers symposium..

Russell's latest art show was at the Huronia Museum in Midland Ontario in Sept 2011, the show was titled Transmetamorphosis. the reason for this title was to depict the mutation of fish and other water creatures.