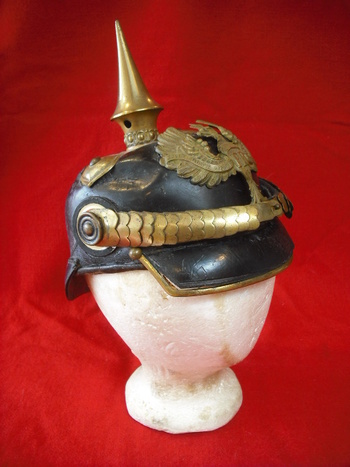 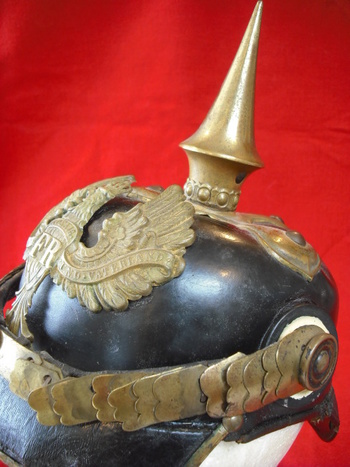 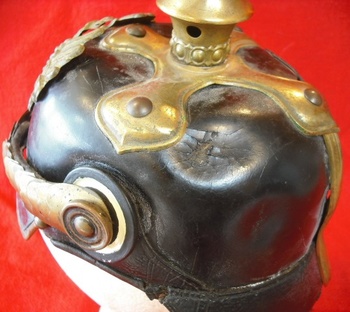 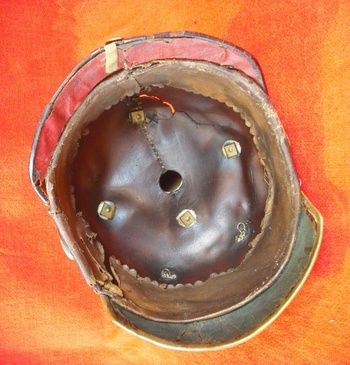 ***Please read Alan's (ww1czechlegion) poste below. He has some corrections that I think are likely accurate!***

I’m writing this in the awareness there are people on CW that are more knowledgeable about Imperial German Items than me. Bluemax1914 comes to mind. Please leave your comments and corrections!

There were a number of models of the German spiked helmet, and this is one that first came out in the 1890s. Unless corrected I’m calling it a Model 1891/97. It’s not an issue helmet, and I believe it was officer quality when new. Enlisted men were issued helmets, whereas officers and one year volunteers were required to buy their own. Complicating matters, anyone with the means to do so could have bought their own, especially senor NCOs.

Although the helmet plate (Wappen) is not from a Dragoon Regiment, I’ve called this “Dragoon Style” because the helmet sports a square cut front visor, cruciform spike base and chinscales altogether associated with dragoons (mounted infantry) as opposed to rounded visors and round spike bases seen on many other helmets, or leather chinstraps issued to most infantry.

I’m going to discuss the plate itself in the next post, but it has a voided crown and has a gilt finish, which indicates private purchase quality. The spike is taller than the issue spike and has a pearlring and dart decoration around the stem. The retraining studs for the spike base are domed, instead of star shaped, which some sources associate with non-commissioned personnel and officer candidates (Fähnrich).

Other indicators of officer/private purchase quality are that the chinscales terminate in rosettes instead of regular mounts, and the visor trim is thinner and rounded instead of flat and chunky. The biggest indicator is the interior. It would have had a silk lining when new, and retains its wide calfskin sweatband. The visor undersides have the typical private purchase cloth covering, the front in green and back in red.

The helmet has German imperial and Prussian cockades (Kokorde) on either side of the chinscales, but they are unlike any I’ve seen. They do not possess the serrated edge I’d expect, and don’t seem to match either officer’s or NCOs. They are made of painted steel, and whoever painted them paid little attention to detail.

I purchased this in a second-hand store in Bremerhaven Germany in the 1970s that mostly dealt in old furniture and jewelry. Therefore I assume it came from someone’s attic or cellar and not from a collector who I think would have sold it on the militaria market. If the helmet was tinkered with, I believe it was more likely by the owner’s grandkids.