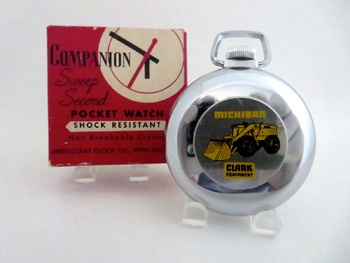 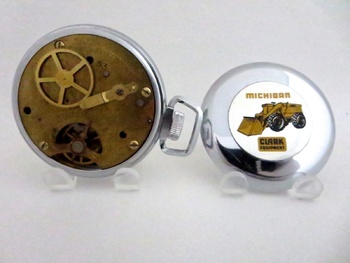 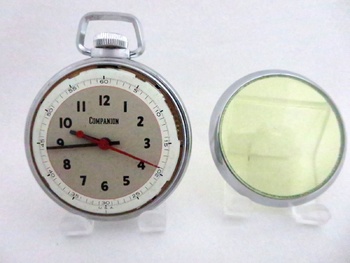 This watch has the advertisement on the back cover instead of on the dial.
The watch is manufactured by The E. Ingraham Co. and dated 1953.
Michigan Clark Equipment Advertising Watch.

Clark Michigan
In 1903, the Clark Equipment Co. existed as George R. Rich Manufacturing Co., a side business owned by executives of the Illinois Steel Co. The company was named after a mechanic who designed the Celfor Drill, used for drilling holes in steel railroad rails. The company was in need of a larger facility to increase its client base, and in 1904 relocated to Buchanan, Michigan. Troubled financial times resulted in the company hiring Eugene Clark, a 33-year-old Illinois Steel employee and mechanical engineer, as a product consultant. Clark determined that the metallurgy of the drill was faulty.

Clark and the “Michigan” Trade Name
In 1942 Eugene Clark died and was succeeded by executive vice-president Albert Bonner. By the 1950s the breadth of Clark’s product sales was primarily driven by Michigan’s automotive industry. This placed the company in a precarious position and poised a huge single industry business risk. Management saw diversifying Clark’s product range through development and acquisitions as the solution. In 1953, Clark acquired the Ross Carrier Co., a manufacturer of lift trucks and straddle, and cable carriers. This also included the company’s subsidiary, the Michigan Power Shovel Co., that had a line of wheel loaders still in the early stages of development.
In 1954 Clark announced it was entering the wheel loader market with a line of six models to be sold under the Michigan brand name and ranging from 15 cubic feet (.45 m3) to 2.5 cubic yards (1.9 m3). To mark its entrance in the earth-moving equipment business, the company built a new plant in Benton Harbor, Michigan.