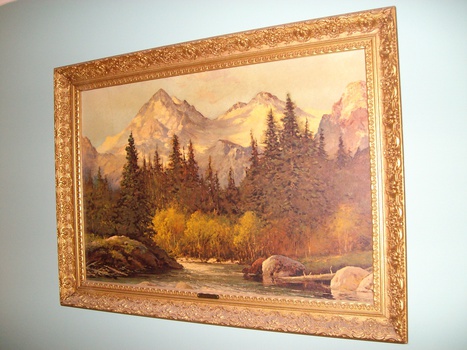 This oil has hung on the wall of our families home for as far back as I can remember. This oil and one other, that I will post later, is the only art of this kind my family ever owned. It's a special piece because of that. And it continues to hang on the living room wall of my home today. Having spent my entire life in the flatland's of Florida with the exception of living in Greenville S.C. for 2nd grade and a part of 3rd, and with what traveling that I have done, which was 98% coastal & island topography, I can only dream of what it would be like to look out across a live view of a sight as "breathtaking" as this shot of the "Grand Tetons". Those of you that enjoy views similar to this, I have only one thing to say to you. I'm jealous as crap! Thanks for looking.

Richard Wood is a very interesting painter from the early part of the 20th century. His originals are very valuable and highly sought after by collectors and investors alike. He was born in 1889 and died in 1979. Once he became famous and his earlier works became very expensive/valuable, he sanctioned limited reproductions in a period from the late 1940's through the early 1950's. Rocky mountain scenes & seascapes were his mainstay as far as subject matter. This famous scene, "In The Tetons" is one of many he painted, and one of just a few that he sanctioned for reproductions. The brass nameplate, along with the title of the scene, is one way that one can tell if the piece is a sanctioned reproduction, approved by Robert Wood. Any original like this scene here would be well up in the six figure category/range. So needless to say, since our family would have never been able to afford an original by him, this "Robert Wood sanctioned" reproduction, is the next best thing. It is actually quite impressive artistic work when viewed up close in person. This guy had an incredible gift of applying oil paint to canvas and ending up with a finished product that would absolutely "take your breath away". Thanks for taking the time to take a peek, and for taking the time to read this journal post about this very astute & talented American painter.