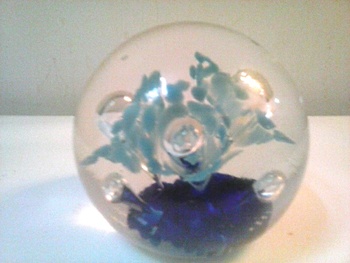 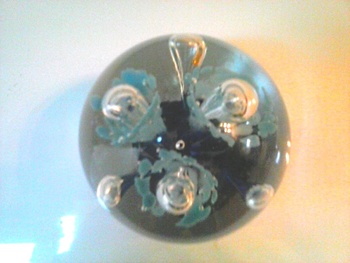 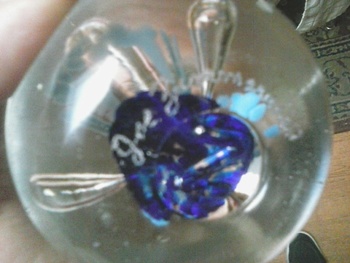 My trip to Salvation today netted me another beautiful paperweight. This one is by Joe Zimmermann of Corydon Indiana. Clearly signed and with a large letter "Z" in relief on the bottom. There is no date but it would have to date before the mid 80's. As his signed pieces are rare. Tragically he was found murdered by a shot gun blast in his glass factory in July of 1986. No suspects were ever found and it remains a mystery to this day. -Mike-

Joe Zimmerman, a glass artisan, owned and operated the Zimmerman Art Glass Company in Corydon, Indiana for over twenty years. He produced hand crafted glass items which people across the country have added to their prized collections. Each item was made by Joe with painstaking care and no two pieces were exactly alike.
In 1938, Joe started spending summer vacations as a glass worker at the Corydon Enterprise putting crimps on the tops of lamp chimneys. He also helped his father make paperweights.
Joe began in earnest to master the skills of offhand glass production at Glass Handcrafters, a Corydon factory where his father had become chief glass artisan. Later in 1957, while his father lay ill from a stroke, Joe worked constantly to improve his skills, taking pieces home for his dad's critical judgment and advice about how to improve the glass products.
In May of 1963, Joe and a business partner opened Zimmerman Art Glass Company. Joe continued developing his talent and created a wide variety of art glass objects. His beautiful paper weights were among the most popular items. He also designed doorstops, pencil and ring holders, baskets, vases, candleholders, lamps, and a wide variety of decorator items. Joe welcomed visitors to the factory, where he demonstrated and explained the glass making process. His unique art objects were displayed and sold to thousands of tourists and glass collectors who visited Corydon -- some were even shipped abroad. People were as drawn to Joe Zimmerman, the delightful man, as they were to his glass collectibles.
A short in the electrical system at Zimmerman Art Glass Company caused a fire February 20, 1983, which destroyed the factory. An outpouring of help came from within the community as well as throughout the country. The encouragement and donations Joe received enabled him to rebuild a state-of-the-art building. When he opened the doors of his new factory, he was joined by two enthusiastic partners, his sons Bart and Kerry. The threesome worked together, with Joe passing the family tradition and talent to the fourth generation of Zimmerman glass artisans. Bart and Kerry were apt learners and soon became vital to the business.
Admirers and loved ones were devastated to learn Joe Zimmerman had been shot to death in his glass factory on July 29, 1986. The community mourned the loss of its friend and highly valued businessman. Sons Bart and Kerry Zimmerman have continued operating the Zimmerman Art Glass Company as their father would have wished. They have proved to be as able and talented as Joe and are encouraged by the community to continue the fine craftsmanship taught by their father.