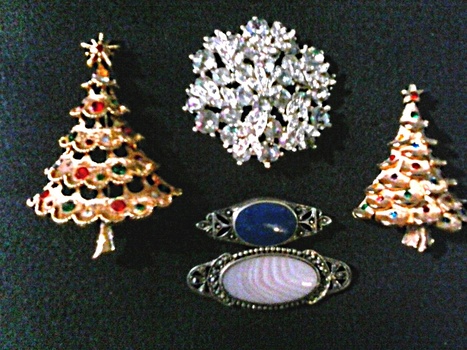 It seems as though Christmas starts earlier every year. I'm not a Scrooge (others may beg to differ) but I like things in a timely fashion and Thanksgiving isn't even here yet. That being said my friend at Salvation was doing tons of Christmas jewelry this morning and I picked out a few pieces that looked nice and were signed. So in keeping with the festivities here's some real silver and fake gold.

1. The largest Christmas tree is from a division of Coro called Corel circa 1970. It's open between the boughs which gives it a 3D effect.
2. While not signed this huge 2" brooch is amazing and heavy. It's packed with large Aurora Borealis crystals giving it the look of an intricate snowflake. It's multi layered with silver leaves on top set with tiny clear rhinestones. It also has a loop to be worn as a pendant.
3. The smaller Christmas tree is signed J.J. for Jonette Jewelry Co. which dates it to the 1970's. They ended production in 2006.
4. The silver bar pin with the blue oval is marked .925 but there's no maker mark. The stone has gold streaks in it which I thought were scratches until I took a closer look. I imagine it's fairly new since it has a locking "c" clasp.
5.The larger bar pin with the pale lavender piece of shell in the center is framed with marcasites. It's also marked .925 with the maker mark ROMA which belongs to the Fairdeal Manufacturing Co., Providence, RI circa 1963.