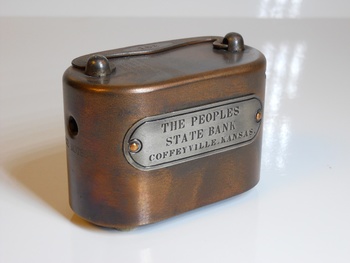 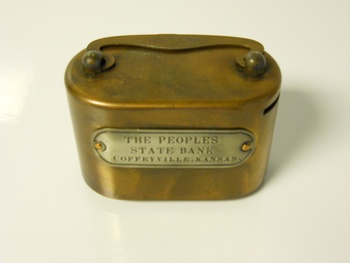 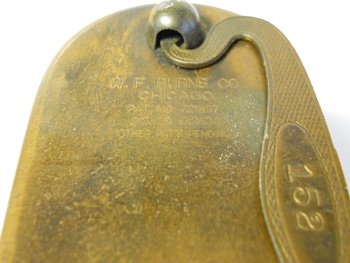 Hi
Everyone.
Here is another Advertising steel Bank i pull from my collection, "The People State Bank, Coffeyville,Kansas", i choose a different form for make change, this steel bank is Oval form, also suitcase style with small handle for carrying around easy, i did find much online on the past history from the bank, so i just find a fews good story from the late nineteen century of event that happen in the town of Coffeyville, enjoy.

Oil was first discovered in 1881 by a man digging water well on West Ninth Street. Around the same time, farmers were also reporting an oily substance oozing out of the ground. By 1882, school enrollment was 428. In 1884, a board of trade was organized in the city.

In 1888 an incident occurred in Coffeyville which startled the whole state and led to an investigation by the state officials. A package directed to Winfield was left at the express office on October 18th. While still in custody of the express agent it exploded and killed Mrs. Upham and her daughter, Mabel. It was a package of dynamite and a political murder was intended by the party who prepared it.

By 1889, the city supported a number of manufacturing establishments including a cheese factory, two saw mills, a flour mill, a fanning mill; and two corn mills. The following year, Luther Perkins erected a new building in Coffeyville with a design that conveyed the permanence and elegance a proper town should display. When completed, it housed professional offices and his new C. M. Condon and Co. Bank. By that time, the legendary outlaws of the 1870s and 1880s were mostly dead, in prison, or keeping a low profile and a bank robbery was the farthest thing from his mind. That; however, would soon change.

The Dalton Gang killedIn October, 1892, occurred the most famous event in Coffeyville history, when the Dalton Brothers and their accomplices attempted to rob two banks. Early on the morning of October 5th, brothers Bob, Grat and Emmett Dalton, along with Bill Power and Dick Broadwell set out towards Coffeyville, Kansas. Shortly after 9:00 a.m. to find the city's streets filled with people. Tying their horses in an alley across from the banks, they dismounted and marched down the alley, three in front and two in the rear. The outlaws, disguised with false beards, divided into two groups, with Grat, Power and Broadwell entering the C.M. Condon & Co. Bank, and Bob and Emmett crossing the plaza to enter the First National Bank. However, the citizens of Coffeyville, aware that the crimes were taking place, attacked the outlaws while they were robbing the Condon & Co. Bank. Grat, Broadwell and Power charged out of the bank into the plaza. All three were hit has they ran towards the alley. Bob and Emmett, who had secured $20,000 from the First National Bank, ran around a block, pausing long enough to kill two citizens and entered the alley at about the same time that Grat and the others got there. In the alley, the outlaws were fired upon by the citizens and a battle began, which lasted 12 minutes. When it was over, Bill Power, Bob Dalton, Grat Dalton and Dick Broadwell were dead and 21 year-old Emmett Dalton was seriously wounded. Out of the ten citizens who took part four were killed and two wounded. Emmett was sentenced to life in prison at the Kansas State Penitentiary at Lansing, but after 14 years, was released.

By the turn of the century, Coffeyville had become the largest city in Montgomery County and one of the most important towns in southeastern Kansas. By that time four railroads converged in the city -- the Atchison, Topeka & Santa Fe; the Missouri, Kansas & Texas Railway; the Missouri Pacific, and the St. Louis & San Francisco. By that time, the town boasted a population of about 5,000. At about the same time, progressive businessmen of Coffeyville were recognizing the possibilities of the large deposits of clay, sand and shale in the area and the potential of natural gas as a fuel.

Coffeyville, KansasOver the next few years, Coffeyville rapidly expanded into an industrial city and by 1910 supported nine glass factories, six brick and tile plants, an oil refinery, four foundries, a plow factory, two box factories, two planing mills, a carriage and wagon factory, paper factory, zinc smelter, pottery works, and other manufacturing facilities. Its population flourished, supporting some 12, 687 residents and numerous public improvements to support them, including a sewer system, waterworks, fire department, police department, nine public school buildings, a street trolley, and electric lights. Other businesses also included five banks, four theaters, a hospital, three daily and three weekly newspapers, four flour mills, numerous grain elevators, two ice plants, a packing house and all lines of various retail trade.
The city continued to grow and by 1915, its population peaked at about 18,500. However, by the very next year, the glass factories had closed their doors. But, Coffeyville's strong industrial base continued to support the thriving community which moved into the future over the next century. By 1940, the town continued to support some 17, 355 people and in 1960, 17,382.
Brown Mansion, Coffeyville, Kansas Since that time; however, it has gradually declined. Because Coffeyville's primary economy has never been based on agriculture, though it is significant, its reliance on industry and manufacturing allowed it thrive unlike many other small Kansas towns. Today, the town supports more than 10,000 residents and continues to support a strong industrial base, including John Deere Coffeyville Works, the Acme Foundry, CVR Energy (formerly Farmland Industries), the Rea Patterson Flour Mill, Sherwin Williams, and in 1999, became the home of one of Amazon.com’s largest fulfillment centers.

Dalton Defenders Museum, Coffeyville, Kansas Coffeyville's history is preserved at the Dalton Defender’s Museum, located at 113 East Eighth Street. The museum houses not only memorabilia and photographs from the infamous Dalton Raid in 1892, it also features many items from the early days of Coffeyville. At Dalton Defenders Plaza and Death Alley, visitors can walk the same path taken by the Daltons in 1892 as they attempted to rob two banks simultaneously. Markers show the locations where four Coffeyville citizens were killed and the old jail in Death Alley displays replicas of the Daltons as they were laid out following their death. Bullet holes from the gun battle still appear on the north brick wall in Death Alley.

The Perkins Building, which was the site of the Condon & Co. Bank held up in the Dalton Raid, continues to stand and is open to the public on weekdays. Unfortunately the First National Bank building no longer stands, but its doors, can still be seen at the Dalton Defender’s Museum. Located throughout Coffeyville are murals depicting the city’s history. Three of the Dalton Gang members, namely Bob and Grat Dalton, and Bill Power, are buried at the Elmwood Cemetery just off Eldridge on South Walnut (Highway 169.) For years, their graves were marked with only a metal pipe which was the hitching post to which they tied their horses on the day they died. However, years later, Emmett Dalton provided a proper headstone. The graves of two of Coffeyville's defenders -- Charles Brown and George Cubine are also buried here. The grave of another Dalton Brother -- Frank Dalton, who was killed in 1887, in the line of duty as a U.S. Deputy Marshal, is also buried in the cemetery.

The Brown Mansion located on South Walnut built in 1907, takes visitors back the elegant lifestyle lived in the early 20th century by W.P. Brown. The 16 room Mansion contains the original furniture, wall and floor coverings, a Tiffany Chandelier, five bedrooms, three full baths, a ballroom and more. The mansion is open sporadically, or can be scheduled for tours, as well as private parties, weddings, or other special events.

The Aviation Heritage Museum, dedicated to early aviation and pioneer pilots of the area, features memorabilia from the Coffeyville Air Base, airplanes, and other displays. Situated in a 1930’s era hanger, it is located in Pfister Park and open on weekends or by appointment.