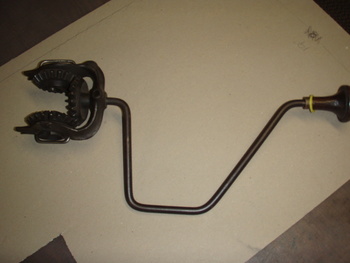 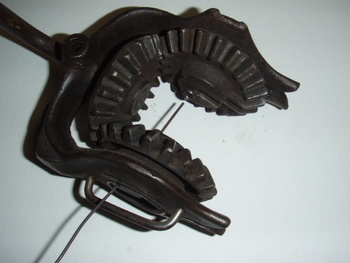 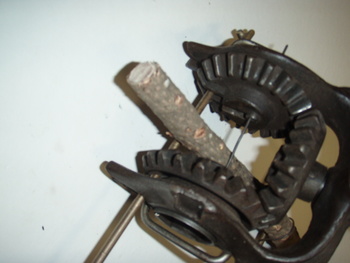 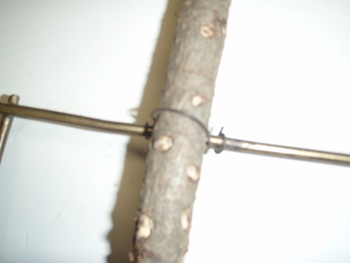 What would you do if you were a farmer/homesteader and discovered that your wire fencing was damaged and could result with your livestock getting loose through the gap in the fencing? If you had a tool like this, you went to your trusty tool box and got out this tool for mending the fence.
Along with the tool, you needed two other things .... a piece of wire about four inches long and a sapling or stick that you found in the tree line and you whittled off the leaves and branches.
Here's how you make the tool work:
You insert the wire piece through the two opposing gears as shown in the second photo . You than insert the fencing through the slots in the tool. You place the sapling against the wire fencing where the gap is in the fence. You then push the tool in until the sapling and the piece of wire are up against the wire fencing (photo three). With one easy revolution of the brace like tool, you automatically tightly twist the piece of wire around the fencing wire and the sapling. The sapling now prevents your livestock from squeezing between the gap , thus creating a temporally fix until you can more securely repair the fence.
An interesting addition along with this tool is how I got it.
A few years ago, I went to the Portland, Ind. engine/tractor show (the largest of it's kind in the country). Of course, I had to visit the tool flea market where I saw this tool. Inquisitively, I asked the merchant what it was used for, He did not have any idea.
I left the flea market and started to the exhibit area where, low and behold, an old timer had a tool like this mounted to his utility trailer. Evidently, it was easier for him to demonstrate the uniqueness of this tool if mounted that way.
After he demonstrated it, I said to him, "I'll be back in a few minutes". I went back to the flea market and immediately purchased the fence mending tool that I saw there earlier. I went back to the exhibitor who demonstrated it to show him my prize. His remark was as follows: " I've been showing this tool for 20 years, nobody ever before saw one or knew how it worked. I show it to you, and 5 minutes later, you have" one............True story ........ hotairfan