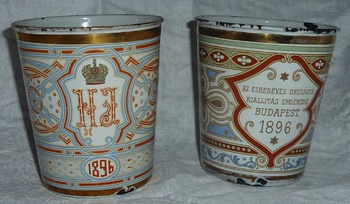 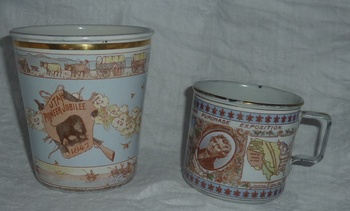 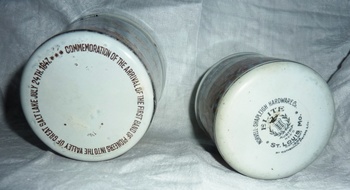 Starting from a my late Mother´s collection, I continue to collect historical memorabilia beakers, cups and mugs (with a handle).
They were mainly produced ca. 1896 - 1930ties as souvenirs to celebrate major historical events. As in Europe in those days these major occasions were mainly royal (Royal weddings, coronations, jubiliees), most of the cups to be found today belong to this category.
Most of the time memorabilia cups were made from porcelain or stoneware. The enamel ones are much much rarer.
There are other occasions too, like world fairs, important history exhibitions or jubilees of towns or major inventions.

My oldest two enamel cups are from 1896: the legendary "Cup of Sorrow" for the coronation of Tsar Nicholas II. (where thousands of people were killed during the free distribution of the cups on a field near Moskow) and a Hungarian Cup to celebrate the 1000th jubilee of the founding of that country.

There are only two American cups that I know of (and have):
The 1897 50th jubilee of the first settlers that arrived in Utah in 1847
and the 1904 mug for the St.Louis World Fair / Louisiana Purchase Exhibition.

Are there any other collectors for this category out there?
Does anyone know about other historic American memorabilia cups?

I would love to hear from you!