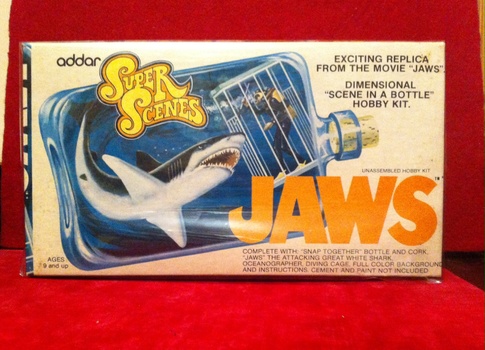 In 2015, it was the 40th anniversary of the release of Jaws. During a recent trade I was able to acquire this nice piece of Jaws collectibles. Addar Super Scenes models included pieces from other franchises, Planet of the Apes being one of them. There were to super scenes model kits with a Jaws theme. This kit was suppose to mirror the shark cage scene and would be put together in a bottle. Kit is pristine mint, unbuilt and in a C9 condition package. Grabbed it because its uncommon and in great shape. Great trade fodder down the road, can only gain in value. Hope you enjoy.