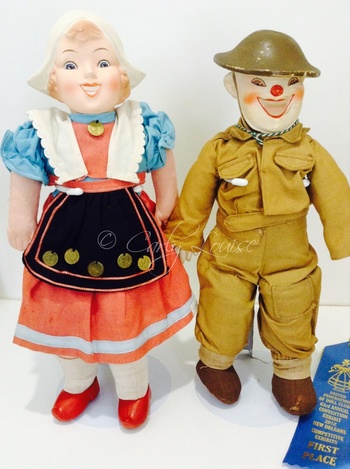 These two delightful and amusing smiling male and female pair were made at the close of WW2 by Belgian company Unica. The company made a small number (from what I can see) of these dolls, some male, some female, in a couple of clothing options, to celebrate the liberation of Belgium and Holland from German occupancy, hence the look of pure joy on their faces. These dolls, I'm told, were mass produced in 1945/46, however not too many of them pop up from what I can see. Holland also made a similar type of doll, to commemorate the liberation of their country around this time too. The female here is an example of this.

Description: The female (mine is named Genevieve)wears what I believe is a Dutch regional costume, a white molded pointed bonnet, red wooden clogs and an original tagged outfit which is in fantastic condition. She has a flange neck, head is made either of papier mache or composition/biscaloid (even feeling it I find it hard to tell) and the body is cloth. Her mirthful wide-eyed expression is unique and amusing. She stands at 12.5".

The male (named Jacques) wears an original military uniform with a molded brown helmet, body is all cloth apart from the head and hands, again I'm stuck as to whether this is made of composition/papier mache or biscaloid. Jacques probably has the most merry and jubilant expression I've ever seen. He's one of my favourite dolls from my collection. Stands at 12".