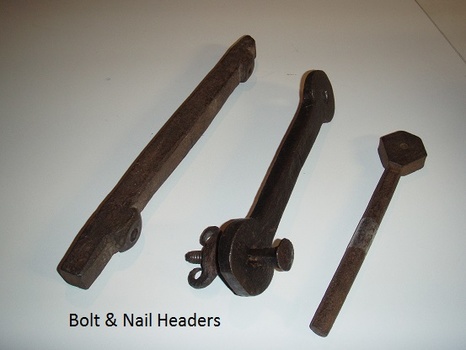 Here are three bolt headers from the 1800's. The one in the middle of the photo has a rams head nut, fastened to a bolt that was fashioned from the header that it is inserted into.
Making bolts and nails could be considered as a cash crop ( I'm taking liberty by using the term "crop").
Bolts and nails were made on farms and homesteads by the farmer and his family, including the children (they usually were assigned to making nails). The homesteader sold or bartered this most valuable commodity to merchants or local community members to get cash or trade for needed household items.
On a trip to Salem, MA, my wife and I went to tour the House of the Seven Gables. The front of the door was decorated and incrusted with hundreds of nails which was obvious that there was no functional purpose other than to let visitors know that the owner of the property had so much wealth that they could afford to decorate their dwelling with valuable nails. The tour guide told us that vanity prevailed even in colonial times, as exhibited by these decorations.
The reason that many early American log homes no longer exist is the fact that when the homesteader moved to better living areas, they burned the old wood houses and barns to the ground to collect all of the hinges, nails and bolts to use on their new dwellings.