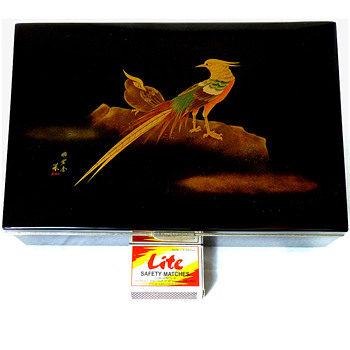 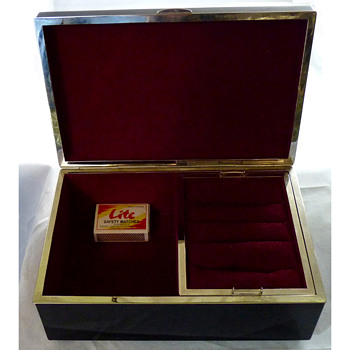 Namiki lacquer cigarette boxes and writing material boxes occasionally turn up, however I've never found a record of another jewellery box, so these are pretty rare birds.

The artist is "EI" (Ei Tagawa). He was born in 1939 and graduated from Ishikawa Prefectural Industrial Art School in 1958, and then joined Pilot Corporation (formerly Namiki Manufacturing Company).

The Japanese firm of Namiki was founded by Ryosuke Namiki around 1915 to develop an improved style of fountain pen, and by 1925 they produced a range of finely decorated lacquer cased fountain pens.

These were released in the West in 1926 and in 1930 Namiki entered a partnership with the British company of Alfred Dunhill to produce a range of lacquer pens, desk accessories, cigarette cases and lighters. These were expensive luxury items particularly suited to the Art Deco decors of the time.

The artists who worked for Namiki are credited with rescuing the traditional art of lacquer work from extinction and leading the revival of the craft. The unique individually decorated pieces they created are now regarded as masterpieces and are sought-after and collectible.

In 1938 the company changed its name to the Pilot Pen Co. Ltd and now named Pilot Corporation it's still a major manufacturer of writing instruments and stationery items.

Throughout its history Pilot has continued to preserve the art of lacquer work and to produce limited and collector editions of lacquer pens and other items.