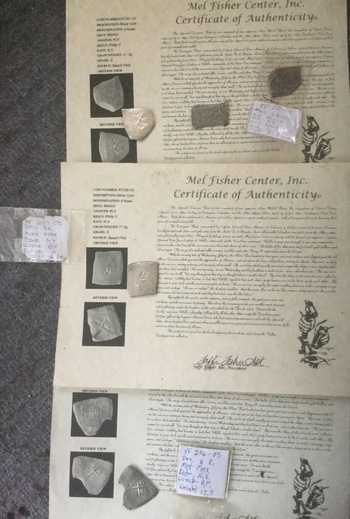 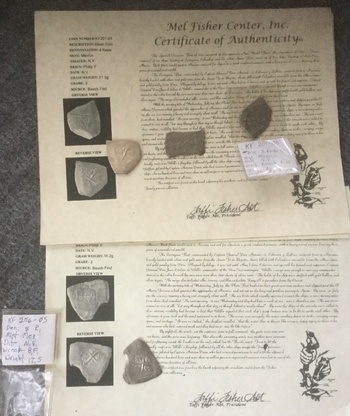 I found these in a pawn shop in Orlando while waiting on my daughter to take a class for her job. They were over priced but the counter girl said they had been there a while and the manager may take less. But he turned down my offer of half the asking price, but agreed to the price if they were still there in three months. I called three months later and made the trip the next day. The story is that a Mel Fisher relative brought them in as a pawn and never returned. The certificates of authenticity appear to be copies, but they all have an embossed stamp. I have five coins but only three have a certificate. They were in these small plastic bags with hand written information about each one. The story to my understanding is that when one was used to pay for something, the merchant snipped off the amount of silver needed for payment. Here in Florida there are many coins made from the silver bars off of the Atocha, but these are not. These are actual coins found by Mel Fisher in 1985...I think?
Thanks for checking these out! Comment and disagreements with what I think I know are welcome.....lol We can all learn something new every day.