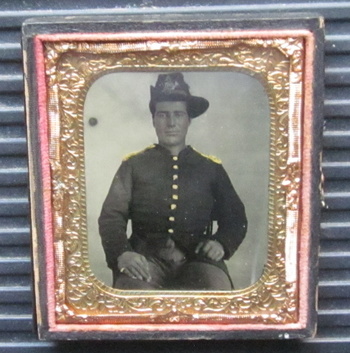 This is a 1/6th plate tintype. CA 1862.
Val lived in Albany, New York before and after the Civil War.
His relations placed his memory trove, related mainly
to his GAR veteran days, up for auction several years ago,
and I won the bid. There is this Civil War period image, and
several post-war images. There are small framed photos of
him, and his wife, and their daughter, Jesse. Also documents,
GAR buttons, post-war diaries etc. Newspaper clipping
has his photo in it. They are all him.
He was badly wounded at Cold Harbor, in Virginia in 1864,
and he lost a leg to amputation. Was in time given an
artificial leg and he married, fathered a child, and worked until
the day before he died in 1913. A survivor!