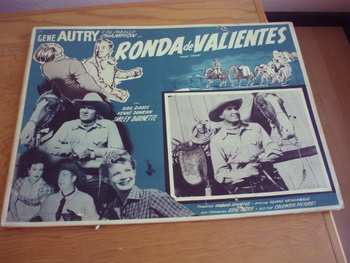 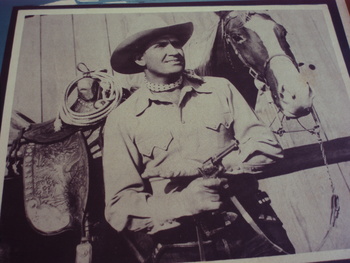 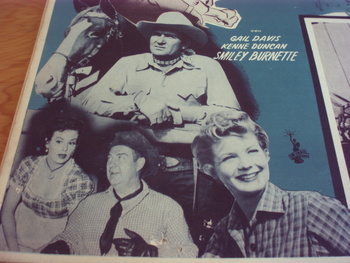 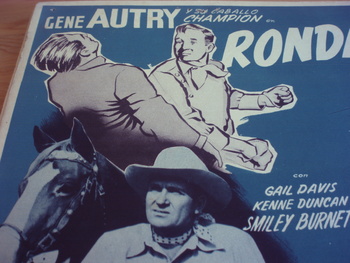 Orvon Grover "Gene" Autry (September 29, 1907 – October 2, 1998) was an American performer who gained fame as a singing cowboy on the radio, in movies, and on television for more than three decades beginning in the early 1930s. Autry was also owner of a television station, several radio stations in Southern California, and the Los Angeles/California/Anaheim Angels Major League Baseball team from 1961 to 1997.
The above photos are lobby cards from the 1953 movie PACK TRAIN One of Gene's final Saturday matinée outings (his big screen tenure would end with "Last of the Pony Riders" later that year) before he devoted his time to his TV shows and other business activities to make him one of the wealthiest men in Hollywood.

When Sunshine Valley settlers face disaster because of a food shortage and medicine shortage, Gene Autry and Dan Coleman, father of Gene's friend Jennifer, buy supplies in Trail's End, but additional supplies promised by the operators of the town's only store, Lola Riker and her partner Ross McLain are not forthcoming. With the aid of the law and his friend Smiley, Gene gets a shipment through to Sunshine Valley, battling off a hi-jacking attempt but too late to prevent a little girl, Judy, from dying because of a lack of medicine. Gene heads for a showdown battle with McLain.