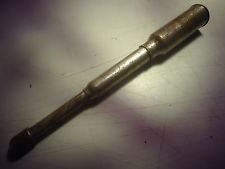 Another variant of the drill, this model requires you to move it in a twist motion in order for it to drill the bit into whatever you were drilling. This dates back to 1891, as it reads: Pat. Nov. 17 1891. The Keen Kutter mark is found somewhere on the piece (All of their tools are marked somewhere on the item.) This doesn't have the typical bar and wedge logo like other pieces. Simply because the trademark didn't have a patented design. It wasn't until around 1896-1900 that the mark first appeared. It was first made in 1891, but it can obviously be a little younger. They have made them until at least 1912, (found on page 447 of the catalog)