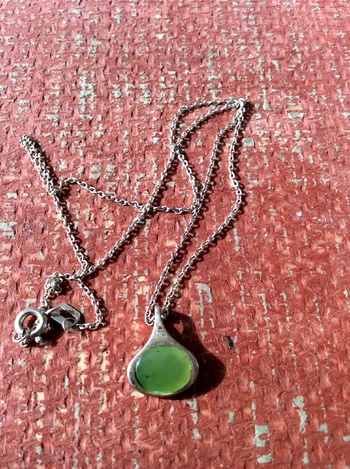 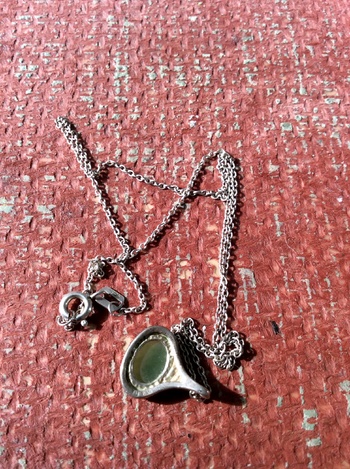 Hello you guys, the pendant I show you might not be very expensive or big, but its really special to me!
This morning there was a big flea market in our neighbourhood, and I dropped of my kids with some family so I could finally relax and walk around :-)
I bought some bits and pieces of jewelry at one stand: it was a couple in their fifties and the husband of the two had just had underwent some drastic surgery: he had a hole in his neck to breathe, and he had to put a finger on it so he could speak (dont know he name of that procedure, sorry). They told me he was still recovering and he had to rest, but he really wanted to be around people and sell his goods on the flea market so he would rest later. He had been collecting old pocket watches for years and now he wanted to get rid of some pieces of his collection (the pieces I bought were only jewelry because I know nothing of old watches).
Some time later I met a friend at the flea market and we were both talking to each other and walking around, and suddenly the guy from the pocket watch stand stood behind me and he gave me this tiny silver pendant with chain. He said they found this after I left and they wanted me to have this.
How very sweet is that?!?
Its a silver and aventurine (I think) pendant, probably from the sixties or seventies, I love its modernist feel.
I really love the Scandinavian feel of is pendant and because of this story I will never get rid of this one!