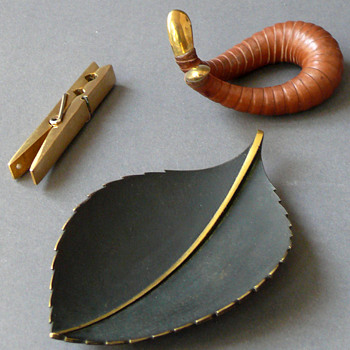 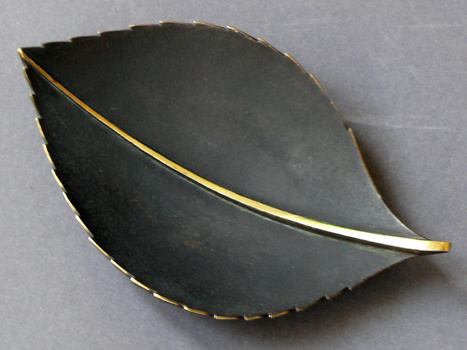 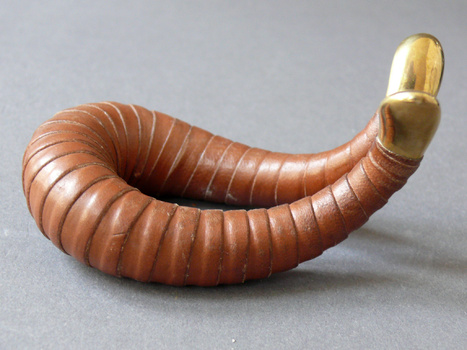 a collection of three Carl Auböck pieces, without damages. a leaf shaped bowl or ashtray, model 3178 from 1937 which has been sold in 2016 for 1200usd at wrights auctions (damn), a pipe holder in brass wrapped in leather and a brass clothespin shaped paper clasp.

The famous Austrian artist and designer Carl Auböck is one of most delightful and highly collectible of modern designers. Auböck was a peculiar talent whose specialties included smaller and tabletop pieces such as paperweights, letter openers and corkscrews and bottle stoppers, or pieces like these. He often rendered his pieces in a combination of different materials. Auböck used elemental materials as leather, knobby wood , animal horn and metal (often like in this case he used brass when metal), giving birth to his forms.

As a young man Auböck studied drawing and at the same time trained in the workshop of his father, a popular maker of traditional high quality bronze figurines and collectibles In 1919, he went to Germany to study at the Bauhaus. Auböck was a pupil of the progressive artist and theorist Johannes Ittens there. Even the Bauhaus is associated with the ordered, functionalist architecture and design a la Walter Gropius and Ludwig Mies van der Rohe, the school was in reality a liberal place for imaginative, playful and avantgarde art and design.

Vintage Auböck designs have this special character, Auböcks furniture items , his free-edge wooden side tables bronze legs, his table and floorlamps or cuttlery designs for Amboss are elegant and purposeful. This barware pieces evince a kind of mirthful practicality. it's more than only the bauhaus "form follows function", no it owns Auböcks own "why not make it fun as well as functional?” credo...