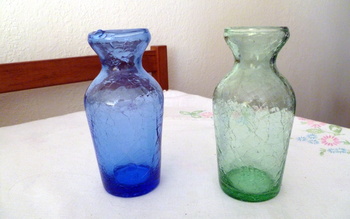 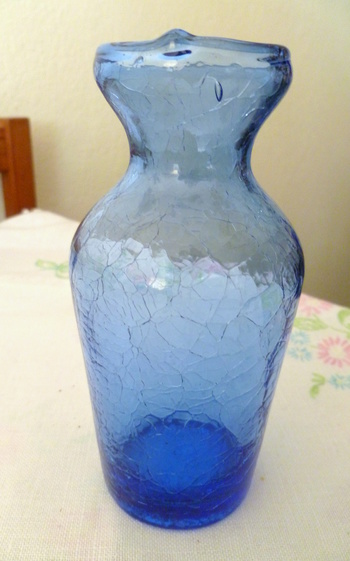 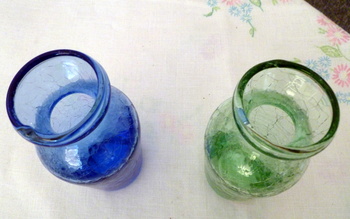 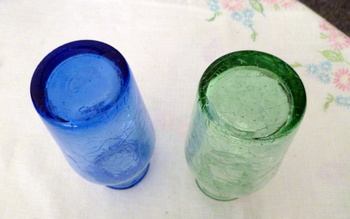 Today I found these two crackle glass vases at the local Salvation Army store.
The vases are 5.5” tall and the biggest diameter is 2.5”.
The rim is rounded and uneven. I have no idea who made them. They are not signed.
I was told that they were made at least 50 years ago.
The following is what I was able to learn about crackle glass:
Crackle glass was first developed and produced in 16th century Venice. Master Venetian glass blowers invented the process of briefly submerging molten hot balls of glass in very cold water, which resulted in the outer layer of the glass cracking. The process would then continue with the glass being reheated and blown into the desired shape. As the glass was shaped and expanded, the cracks would become larger, resulting in a distinctive crackled effect.
Pieces made by this method are sometimes called ice glass, craquelle glass, and overshot glass.
Glass bearing this distinctive crackle pattern became very popular in the late 1800s.
Many factories throughout the United States and Europe utilized the process from about 1920 through 1960, and much of the world’s crackle glass pieces were produced around this time. Very little new glass has been produced with this method since then, and the process is not commonly used in glass creation today.
Crackle glass has become a popular collectible. Most collectible pieces are transparent, allowing the effects of the process to shine through the piece. Some have additional painting and embellishment on top of the crackle effect, adding another dimension to the design. This style of glass was made in a variety of colors.