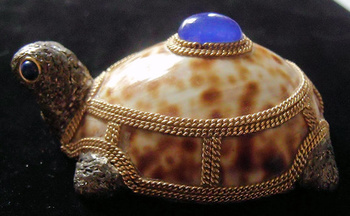 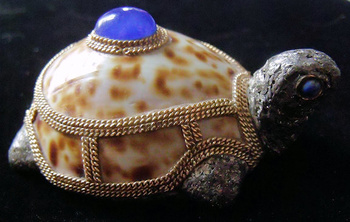 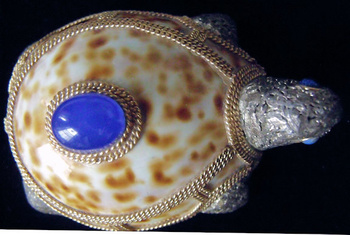 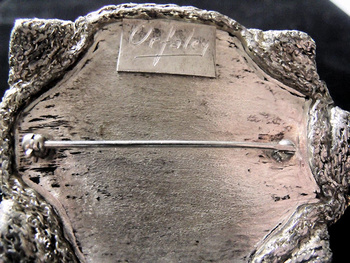 The waters surrounding the Philippine Islands are the source of many of the beautiful shells found in collections and incorporated into decorative items, including ones for personal adornment. Although his family moved to Argentina when he was very young, and he later moved to New York City, Naef Orfaley shows his love of his natal country in his inventive and whimsical animal figures inspired by those tropical shells

In this case, a leopard cowrie makes a perfect carapace for a bejewelled turtle. In checking on line for other examples of Orfaley's work, see that he did not seem to mark metal content unless a piece used 18K gold; all pieces are represented as silver, even though not marked as such.

By comparison with other pieces priced in the thousands of dollars, this is a relatively bargain basement item. The large 'gem' is certainly glass; the eyes appear to be small cabochons of lapis lazuli. I have not had it tested in any way, so am assuming the gold rope trim is gold filled or vermeil. I no longer remember how much I paid for my turtle on eBay, almost certainly less than $100.

At 75 mm nose to tail, & approx. 35 mm from plastron to the top of the blue stone, this is a brooch only in recognition of the pin assembly attached. It sits quite well & lives at my house as an objet de vertu. 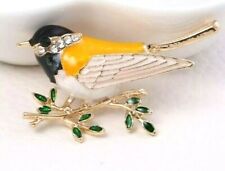 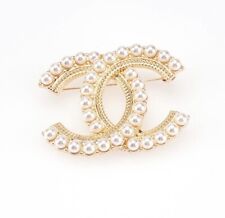 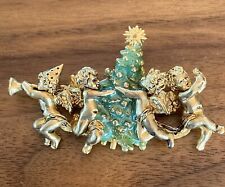