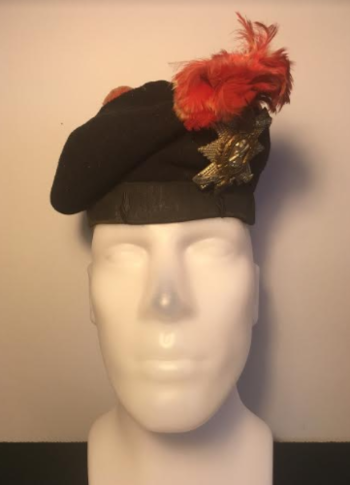 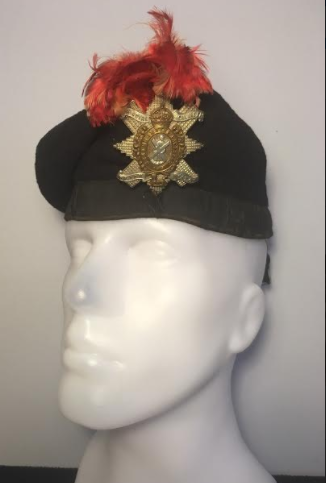 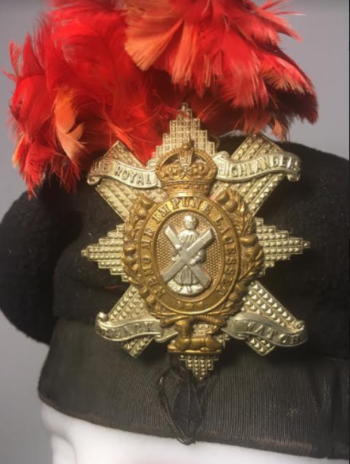 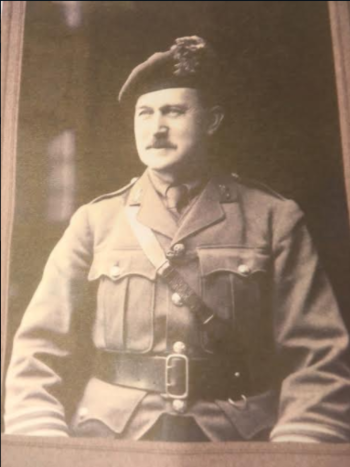 A very rare black balmoral bonnet to the Black Watch (Royal Highlanders). The bonnet has a very nice nice Black Watch badge to it. The badge private purchase, a very intricate one with long scrolls and is a multi layer piece. This badge is probably the nicest badge I own, on headgear or not. Right over the badge is it's original red hackle, distinctive to the Black Watch. Nice to see a piece of headgear with a hackle and a badge together.

The tails have been removed as per service at the front, though a little stub remains of the tails. This is bonnet has seen the trenches, it is very worn and dirty but in pretty good condition considering it was worn in the field and is over 100 years old.

There is some khaki marks to the top, I believe there also may have been some sort of khaki cover on this cap during front line service, but I am not positive on that.

I have a copy (as the original stayed with the family) of a photograph that accompanied this bonnet, is shows the bonnet being worn by an Officer in a WWI cuff rank tunic, I believe the rank is to a Major or Lieutenant Colonel. The surname of the officer is Wallace, it may be attributed to Lt. Colonel Robert Francis Hunter Wallace but I don't yet have a positive identification. This candidate seems the most likely as several things match up, and there not any other Wallace's that high up in the Black Watch during WWI. If this cap was Wallace's then here is a bit of information on it's possible owner.

Robert Francis Hurter Wallace was born on the 27th of December, 1880. Served in WWI, as Lieutenant Colonel, eventually gaining rank of Colonel sometime during or after the conflict. He was invested as a Companion, Order of St. Michael and St. George (C.M.G.) During the First World War, Lt. Col. Wallace was honored with both the Belgian and the French Croix de Guerre. Wounded sometime during WWI, gun shot wound to the thigh. Had 3 sons, (two served with the Black Watch in WWII, one of which died in 1944). Succeeded as Chief of Clan Wallace on the death of his cousin Archibald Malcolm Wallace on 5 July 1948. Died in 1970.

That was very basic research I did myself, there is obviously much more about this Officer to be researched but that is what I have come up with for now for the most likely candidate of owner of this cap.

This bonnet is one of my favorite pieces of headgear in my collection, despite it not being in the best condition it is a great piece to one of the most famous and one of my Scottish regiments of the British Army.

Overall a fantastic piece that was worn by an Officer, and has probably seen the trenches, and has a beautiful badge and hackle to accompany it.

*Note* I had originally posted this Black Watch bonnet previously here, but I decided to take new pictures as well as edit my post a bit.