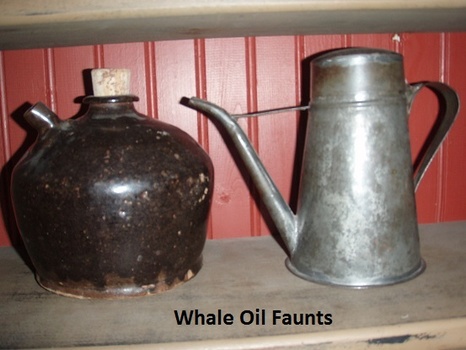 Here are two whale oil faunts, probably from the late 18th or early 19th Century. Depending where you were located on the continent, along the coast or further in the shore, Your lamp oil was made of animal fat (away from the coast) or fish oil (coastal villages). If you lived along the coast, whale oil was by far the best lighting oil that could be used. Whale oil burned clean and with a very bright light.
These two faunts were used by the people to keep a small amount of oil in the house without having a large cask in the house that could be knocked over and spill.
The one is a stoneware that you filled up through the corked hole in the top, and the oil was poured into their lighting device through a small pouring spout .
The other whale oil faunt is made of tin, soldered together that only held a small amount of iol for the same reason as the first faunt.