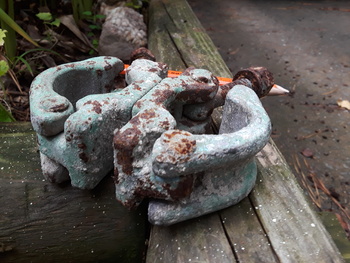 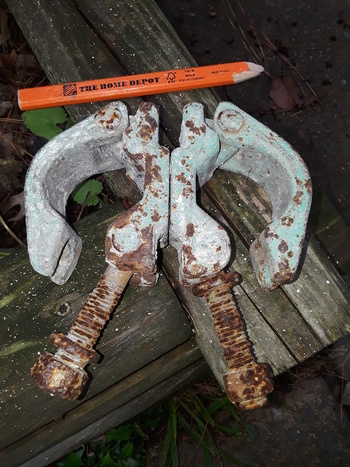 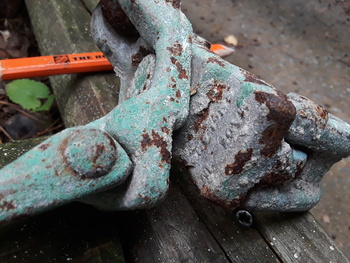 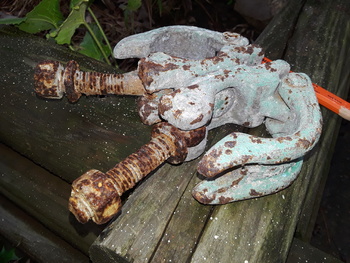 This was found during my recent trip to Florida, discovered basically underneath shrubbery/landscaping where it had probably otherwise been laying for sometime </= a decade. (which is the age of the structure the shrubbery surrounds...) There are large-ish power lines/poles nearby, which may be nothing more than a coincidence. (there's also been a hurricane or two that have blown thru there meanwhiles...?)

And that's the extent of what I know about it -- other than that I was kinda instantly attracted to its unusual crusty "greenish over silverish over rusty" patina. I still can't tell what might have resulted in that -- by its greenish tint my first thought was that the clamps part of the thing was made of a brass/bronze metal but they are totally magnetic (plus slightly rusty at spots, like the eyebolts and nuts attached to it) which disproves that idea. The silverish color *might* be the remains of an original galvanized (??) metal layer of plating but I don't know that either -- much less what could have ultimately started to turn (nearly) the whole thing turquoise green. It does *not* look like any of it started out as 'paint' -- rather, it really does seem to be the result of some variety of corrosion from something. And despite its crustiness, both clamp-parts of it still open/close, their eyebolts swing back and forth (though their nuts are probably rusted in place?) and its two halves can swivel back and forth. The only marking on it is "MADE IN ENGLAND" (maybe?) cast onto only one half of its 'swivel' portion. (pic #3)

SO -- does anybody have any friggin clue what the da*ned thing really IS/WAS??? Electrical/powerline part?? Building/plumbing part?? Tool (part?) used for something related to either of those things?? Nautical/boat part?? (that one's no doubt reaching, but it was found in FL within a mile or so of the actual Gulf Coast, and there have been storms there...??)

I'd love to hear y'all's thoughts/ideas/guesses -- even moreso if somebody really DOES know -- PLEASE leave a comment! ;-) Meanwhiles, I've gotta try to find it a display spot to sit someplace out in the carport (probably) where it won't get any further rained on/ground rusted/yada yada but will also hopefully retain its funky green color/texture...? :-) 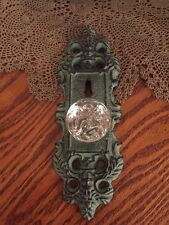 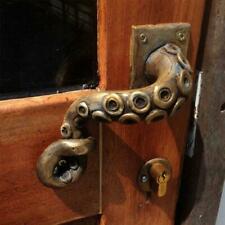 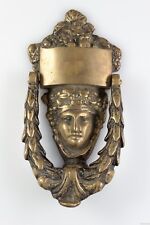