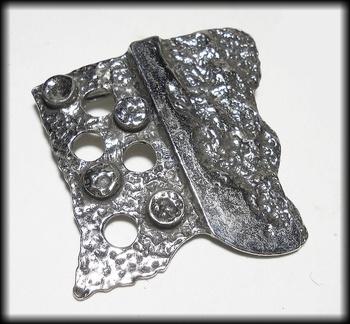 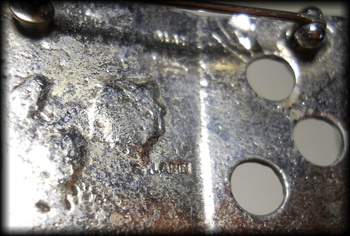 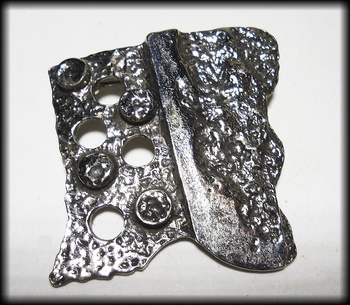 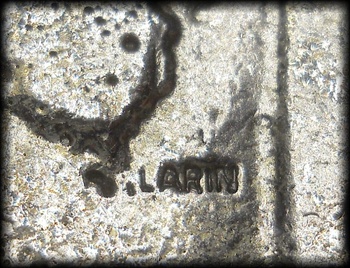 Found this, and took a chance on it as it was marked with a name I had not heard of. Appears he was Canadian jewelry maker and from Montreal. It says her was working as early as 1968, and it is noted that that his shop did close in 1972 from what I found on-line. I will quote some info here, but also provide the link as there is just interesting read there.

Robert Larin
"""Robert Larin was creating pewter jewellery as early as 1968 based in Montreal, PQ and selling across Canada. Born in Montreal, he was in his mid 20's in the late 60's and had a factory on rue Papineau. Here he employed approximately 25 workers most of whom were deaf, which worked perfectly in a noisy shop where communication even between those who could hear, had to be in sign language. Most of Larin's production jewellery was made of pewter, which was cast by the lost wax process and then filed by hand to remove the rough surfaces left by the casting. The piece was then oxidized or plated with silver or gold and then, finally polished.

His style defies generalization; the designs range from these totally organic forms.....to the architecturally designed elements displayed by the bracelets .... Not only were the shapes and dimensional forms of his jewellery unique, the surface textures that he employed were amazing.......... Robert Larin ceased production around 1972 according to the information I have """""