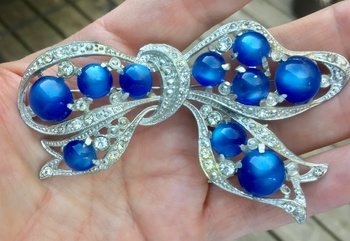 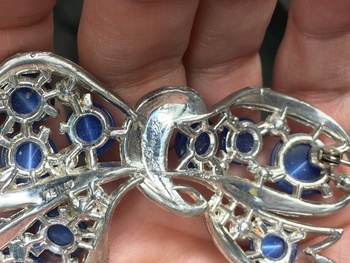 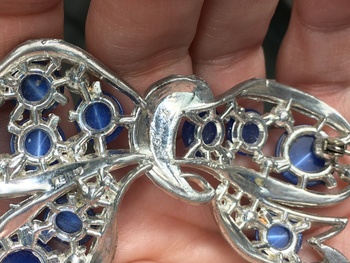 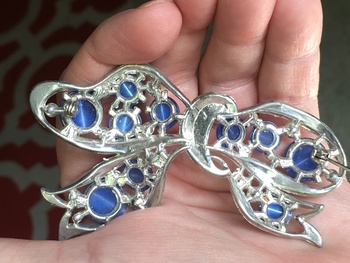 I hope someone can help me. I found this pot metal pin at an estate sale about two weeks ago. I did not notice a signature until looking with magnification. The partial hallmark REINAD in capital letters is legible. I then noticed a cursive letter on the ribbon section, and when looking more closely, found the hallmark CHANEL in cursive. After researching this brooch extensively, I have not found a pin that looks like this, or has double struck names ANYWHERE. I have read Robin Deutch's article for CJCI "Who was Reinad?", and how a double struck Reinad and Chanel pin is extremely rare. There is a picture of a double struck pin in the article. I understand that the Chanel marking was what Reinad Novelty used in the year 1941 until the House of Chanel in France was going to sue the company for using their name, and thus removed. Both names are on this pin. What is perplexing to me is that the pin is most definitely pot metal, and looks like a pin from the late 30s or early 40s. I have also researched everywhere to find "fake" Reinad pins, but the "questionable" Reinad signatures are not pot metal: It doesn't make sense that this would be a fake, as the small family estate sale where I purchased the pin, had antique and vintage jewelry of a woman who had passed away at 95. The "newest" piece I had purchased at the sale was a Hollycraft necklace. I would appreciate any information that you can give me, regarding if it is authentic. Thank you for your time.