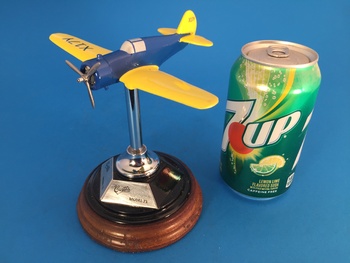 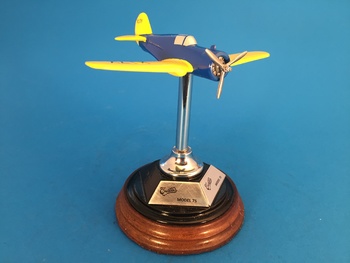 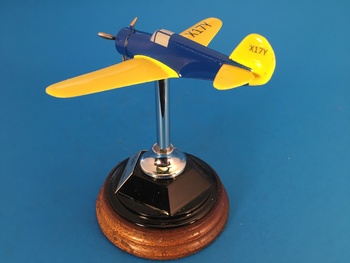 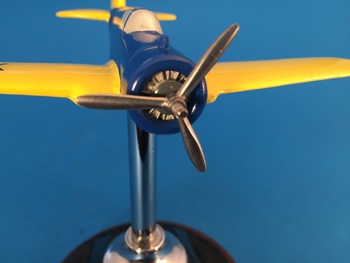 Every once in awhile an old, strange model becomes available. In some cases the model needs to be researched to confirm its identity. This not the first time an odd looking model is mounted on a classic Curtiss-Wright pentagon base (5 facets). I once had this experience with a Curtiss Dive-Bomber prototype the XBTC-2. It was much like this model, a strange, rare design that turned out to be a Curtiss prototype. This one is also a very rare Curtiss-Wright design, the CW-75. This prototype was the very first of a long series of HAWK designs that include the P-36 (Mohawk) and P-40 (Warhawk). Curtiss used it many years as their test mule for engine, propeller and canopy designs... all manufactured by Curtiss-Wright.
This may also be the first version of the famous pentagon base that quickly identified Curtiss design models and Curtiss factory display models. When originally located, the design suggested that it was an early P-36 but the nose was substantially short. upon further study it was discovered that the cowling was missing. A new, correctly scaled cowling and engine were machined and installed. The paint is correct for the airplane as these were colors that Curtiss-Wright chose as "test model" colors and as an unsubtle reference to the then current schemes used by the AAC in 1935. For more information- Under 6 May 1935 at this link:
https://www.thisdayinaviation.com/tag/curtiss-wright-corporation/