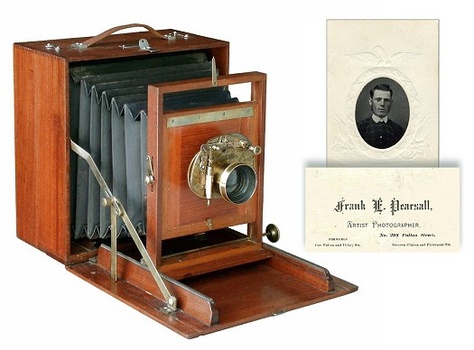 One of my goals as a collector is to understand cameras, their purpose, and the builder’s intent. The camera shown here was patented in 1883 by G. Frank E. Pearsall; a well known Brooklyn photographer who opened his first studio in the 1870s. As a famous portraitist, Frank made images of celebrities, politicians, and the wealthy. One of his best known pictures is a portrait of Walt Whitman.

There are only three known examples of Pearsall's Compact Camera; which would lead us to believe it was a commercial failure - but it was actually a radical departure in camera design and unlike anything seen before it. This was the first camera that could completely fold into its own protective case (all delicate parts were completely encased within the outer body).

Unbeknownst to Pearsall at the time, the ‘DNA’ of his Compact Camera would eventually be rediscovered in 1890 by George Eastman, adopted by all major builders, and appear in every one of the smaller, refined self-casing cameras made through the mid 1900s!

But what about Frank: What was the motivation for a successful Brooklyn based gallery owner and portraitist to suddenly build his own camera? After years of research, I am getting closer to the answer.

Along the way, I was fortunate to acquire a late 1860s tintype portrait of Frank Pearsall – apparently in his 20s – and a business card with an early studio address. Even if I don’t unravel the mystery of why Frank built this fascinating camera, it’s satisfying to know that I’ve reunited the maker and his camera.

BTW … don’t let the Pearsall family portrait fool you. The business card and tintype are small in comparison to Pearsall’s “Compact” camera.