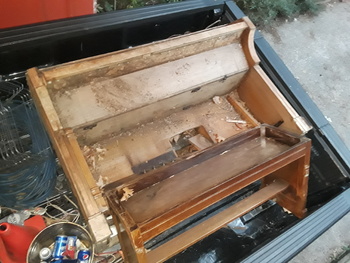 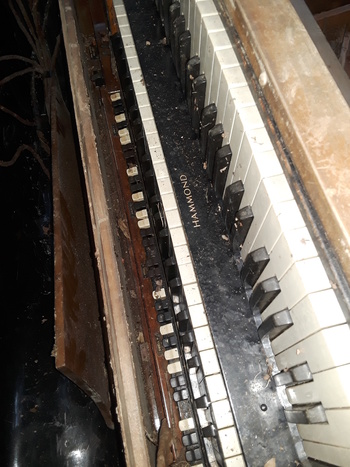 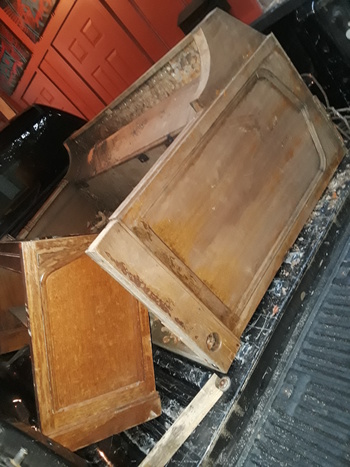 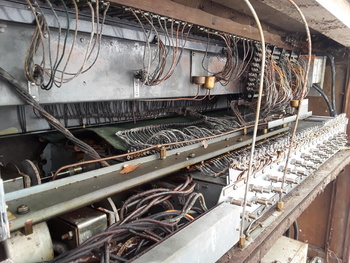 YIKIES...the perils of owning a pickup truck come back to haunt me once more <groan><wink> as here's what's currently laying in the back of mine at the moment, until I can further manage to drag it back outta there and examine it closer to find out what is/isn't still present inside and/or what kinda condition it truly is in...?

This well-thrashed chunk of (*very heavy* for its size, I remind y'all) old 'junk furniture' is in reality the remains of a HAMMOND "Concert Model E" electric organ, manufactured from 1937-49 by the HAMMOND INSTRUMENT CO. of Chicago. It was then their 'top of the line' instrument, and is indeed a direct predecessor to the now much more ubiquitous "HAMMOND B-3" model. (1954-74, which remain quite desirable instruments to this day particularly for use by "rock/gospel/country" style musicians) Unlike the B-3 (which was actually intended for the 'home living room market', its current popularity for 'pro' musician usage was certainly never imagined by Laurens Hammond, its inventor) this model was the fullest-featured one (thus heaviest, I remind y'all again) intended for usage mostly in churches, especially smaller ones that didn't have the space/means to obtain even a little actual pipe organ.

This particular example was literally rescued from laying on its back in a vacant lot in the 'hood -- lord only knows how long its been there (my partner who first noticed it says a few weeks or a month at least since it got dumped there?) besides obviously having suffered "poor storage" someplace else for maybe many previous decades. Believe it or not, its cabinet is actually walnut solids/veneers, as is (most of) its bench which was also dumped with it. It would have originally had a full size "pedalboard" too, but that part wasn't there to rescue. Other than all that -- it does appear (weigh?!) that most of its actual 'guts' are probably still present inside -- which might indeed make it eventually well worth the effort it took to drag the d*mned thing home with me...it is obviously a good bit past "restorable" by itself, but very well might be able to contribute some now nearly unobtanium bits and pieces to other collectors/enthusiasts of HAMMOND organs...?? :-) :-) :-)

Tomorrow morning I guess, I'll need to get the thing dragged back outta the truck (onto a pallet or something?) so's I can get a first look inside it... ;-) :-)

-------------EDIT, the next day...--------------
I just swapped out one of my original pics for another showing (part) of the actual internal 'guts' of the organ. I still remain slightly bewildered at how *good* all that stuff in there remains, given how totally thrashed its containing cabinet is... <wow>