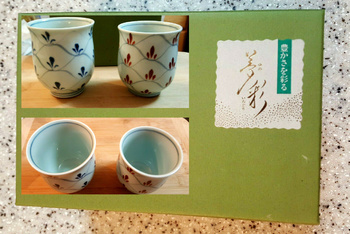 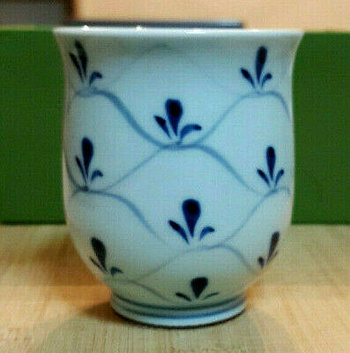 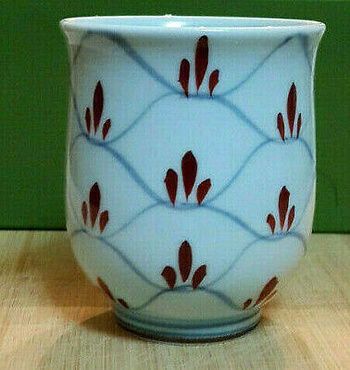 Not sure of the dimensions of these cups, yet, as I have not received them. The larger holds 6 ounces and the smaller holds 4 ounces. Both are marked indistinctly on the bottom. I think these may be Kutani, but not sure of that. They are porcelain and hand painted. They have been on ebay for several months and for very little money, under $20 shipped, so not sure why I dithered around as they completely fit the bill for a meoto yunomi set for my collection, decorated on all sides, hand made and painted, marked, in a box and I like them. Yeah, it is not a tomobako, but it is still a box, so they will be easy to store. They are either new/old stock or a gift that was put away and never used after opening. Guessing the latter. The label on the box appears to have been hand signed. No idea of age, but guessing around 20-30 years old. Apparently meoto yunomi were a common gift for Americans visiting Japan. I don't think this set was made for export as there is no English writing on the box. Set number 14 in my meoto yunomi pile! Maybe CW will start a "Japanese Pottery" > "Meoto Yunomi" classification, since it seems they recently started a "Sake Set" classification. Wonder what the tipping point for the number of posts needed for that is? ;)