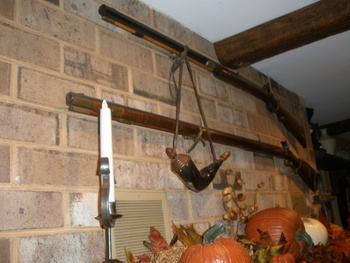 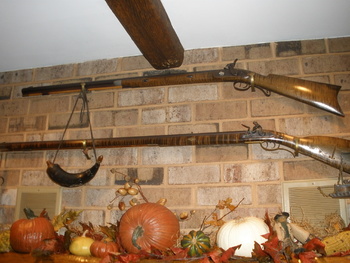 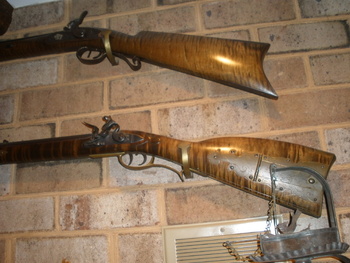 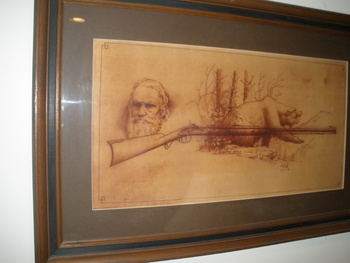 I built these two muzzle loading rifles in the 1990's. Both of them won matched competition shoots and the upper rifle (the Hawken) also brought down a deer for me.
I built both of them because they were the style that I greatly admired . The lower of the two is a "Peter Gottner" Pennsylvania style flintlock with a roman nose stock and a tiger stripped maple stock. The grade of which is P-Plus-Plus. This interprets to a maple curl from the tip of the muzzle to the end of the putt plate with only 1/4 inch between curls. It is 45 in caliber with a gain twist (a gain twist is a twist that starts out with mild revolutions and, just before the muzzle, the twist rapidly increases. This improves the accuracy. but limits the rifle to patched round ball ammunition).
The upper muzzle loader rifle is a Sam Hawken Mountain Man's rifle (like seen in the movie "Jeramiah Johnson). It is a cap lock gun (as were most of the Hawken rifles) and in the 50 caliber. It's stock is also of P-Plus-Plus grade curly maple
The Hawken brothers built their guns in St. Louis, which was the hub of the trek to the west and destination of the Mt. Men fur trade.
I was fortunate enough to copy the dimensions from an original Sam Hawken Rifle, so every detail, diameter, and material is as the original, even down to the pewter fore end cap. Not wanting to have it be confused as an original Hawken, I made the lock and inserted a cut out buffalo from a nickel into the plate. I am left handed, so, both rifles are left handed versions.
The last photo is a drawing of Sam Hawken and his famous mountain rifle, with a grizzly bear in the background.
My wife's cousin is also a fan of the Hawken. He is a commercial artist in N. Carolina and he sent me this ink drawing because I made and sent him a bird head powder horn.