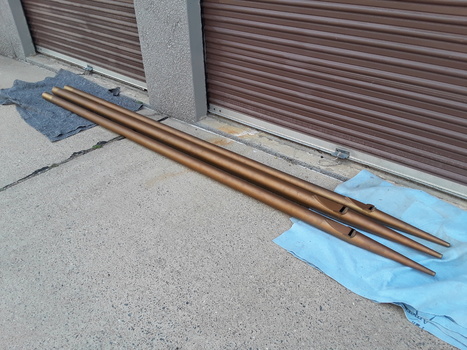 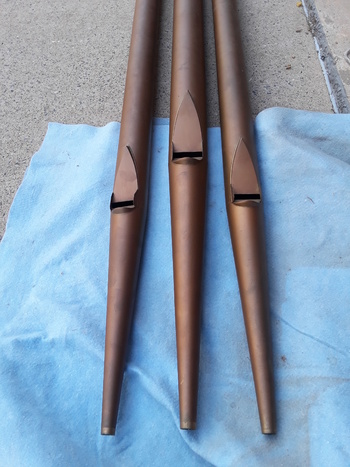 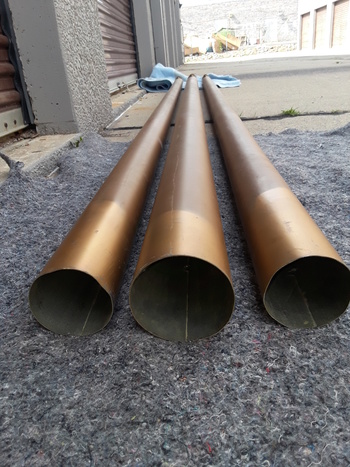 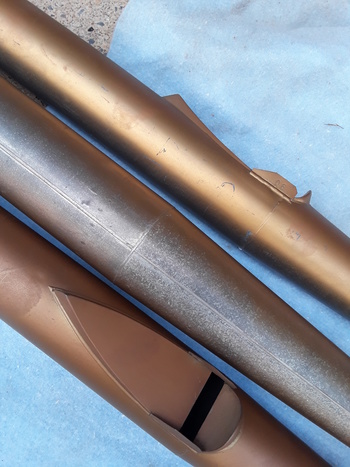 These three pipes were originally constructed by Casavant Freres Ltee. of Saint-Hyacinthe, Quebec, Canada for use in the decorative casefront panels of their then brand new instrument installed in the Cathedral of St. Augustine, Kalamazoo, MI, in 1951. Nichols & Simpson, Inc. of Little Rock, AR replaced that organ in 2002, when these three pipes and nearly all others in the outermost "pipe fences" facade display gave their way to new functional display pipes mounted in (most of) the original white oak wooden casework framing. These (and the rest of the old ones) had never been 'speaking pipes' or in other words were only 'just for show' -- part of a screen of sorts covering up all the functional pipes and parts of the organ behind them, in mirror image at either corner of the rear gallery of the church. The rebuilt organ actually looks very much the same as it always has despite the substitution, we specifically re-engineered it that way in order to *not* make the Cathedral interior look any much different, because they wanted it that way. MANY parishioners then (that weren't part of their volunteer crew that provided invaluable hours of help cleaning and re-finishing all that oak once we took it apart for 'em?!) were overheard questioning what had happened after the fact, needing a little specific further info to be satisfied with what they'd $pent all that money on, when it didn't look to them like anything had 'changed' at all?? ;-) <lol>

Pic 1 shows my three 'survivors' laying on the ground in front of two 10' storage locker doors, showing that they're all roughly 16-18' long though only a few inches across. Their original paint (we in the organ trade call the color "radiator gold") has darkened a bit as seen at their tops in pic 3 which also shows to the sharp eye that these three were not neighbors by their 'tan lines' that don't match up to each other, that pic also shows their open tops and unpainted interior showing the unmistakable speckling pattern of the old zinc metal they're made of. Pic 2 shows their faux 'feet' and 'mouths' (the pointy part at the bottom and little open slot thingies right above it, respectively) where the sound would be produced if they could do it, and pic 4 shows them rotated facing different directions that shows how the 'mouths' are created in profile, (top) their backsides that weren't ever fully painted, with solder seams, (center) and front-on. (lower) All of the length above these bottom 'feet' is in fact nothing but an open, empty metal tube. Each one has a number stamped into its side that would have marked its previous relation to its neighbors.

A small photo here on the Nichols & Simpson website shows one side of the organ as it currently exists, the other is indeed mirror-image, and the console (keyboards) and choir seating are in between the two.

I have had these pipes since 2002. In my old house I had a tall stairwell wall where they used to hang comfortably...in this house I barely have any walls that *long* (not to mention tall?!) so they currently reside in safe storage awaiting further display somewhere, somehow... <groan> 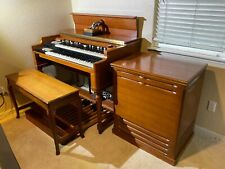 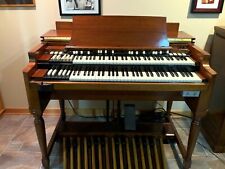